by Brian Jamison on October 11, 2022 in Uncategorized

We thought it’d be a good idea to release a gargantuan update!

This small Empire carrier isn’t able to repair gunboats, but has a mini shipyard aboard that can create entirely new gunboats. You’ll still need to find the crew for them…

This new Empire gunboat can be used for mining ore and also point defense against Reapers, boarding shuttles and missiles. Create them on the Perpetuator.

This Irenic industryship recycles water in the fleet, making jumps to water-poor worlds much less dangerous.

The powerful sensors aboard this Irenic science ship extend your jump clock 50% longer, allowing you to loiter in a system longer with an immediate escape plotted.

A Galacticonn industryship able to package available fuel into cargo. Unlike smaller fuel cargo, each of these is good for an entire jump’s worth of fuel. The Fueler also increases fleetwide fuel collection speed by 20%.

The Hypermaul allows you to create weapon upgrade factories that produce specific weapon upgrades. Unlike store-bought upgrades, these come with no penalties.

Look for new Rover ships in our next update!

Two ships in the fleet now have unique abilities. Access each ability by selecting and right-clicking the ship.

Your Battleship just gained the ability to self repair. Select and right click on your Battleship for a Damage Control option, where you can self-repair 1 unit of armor every two days at a cost of 4 ore per unit. We hope to expand the drama and possibilities with Damage Control in the future. 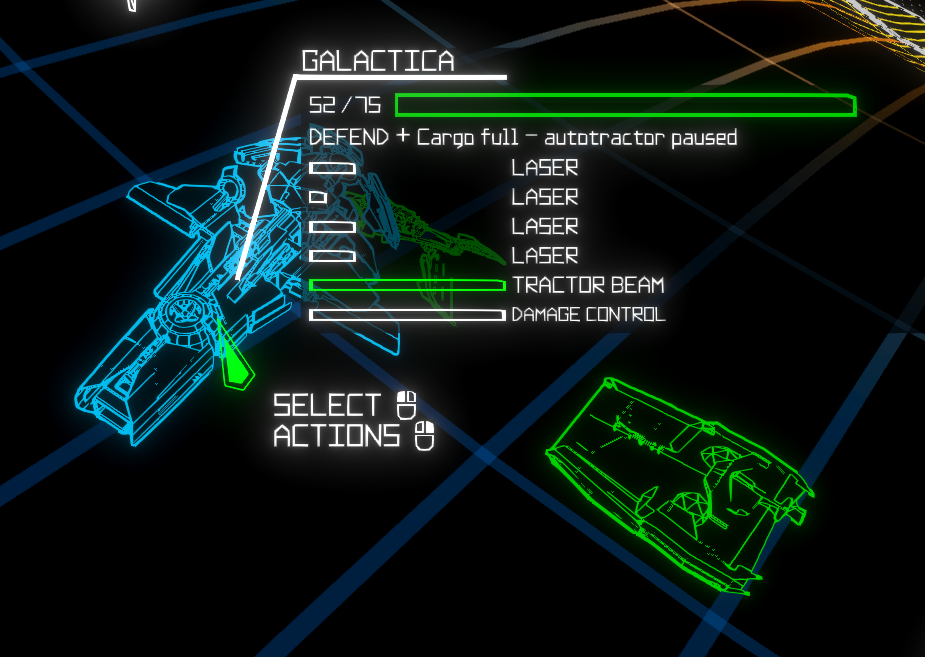 The Pact Scout just gained a major new ability: Muster. This risky action sends the scout ahead several jumps, looking for either crew or ships of a certain type. The scout may be lost, particularly if you cannot reach the designated rendezvous in time. 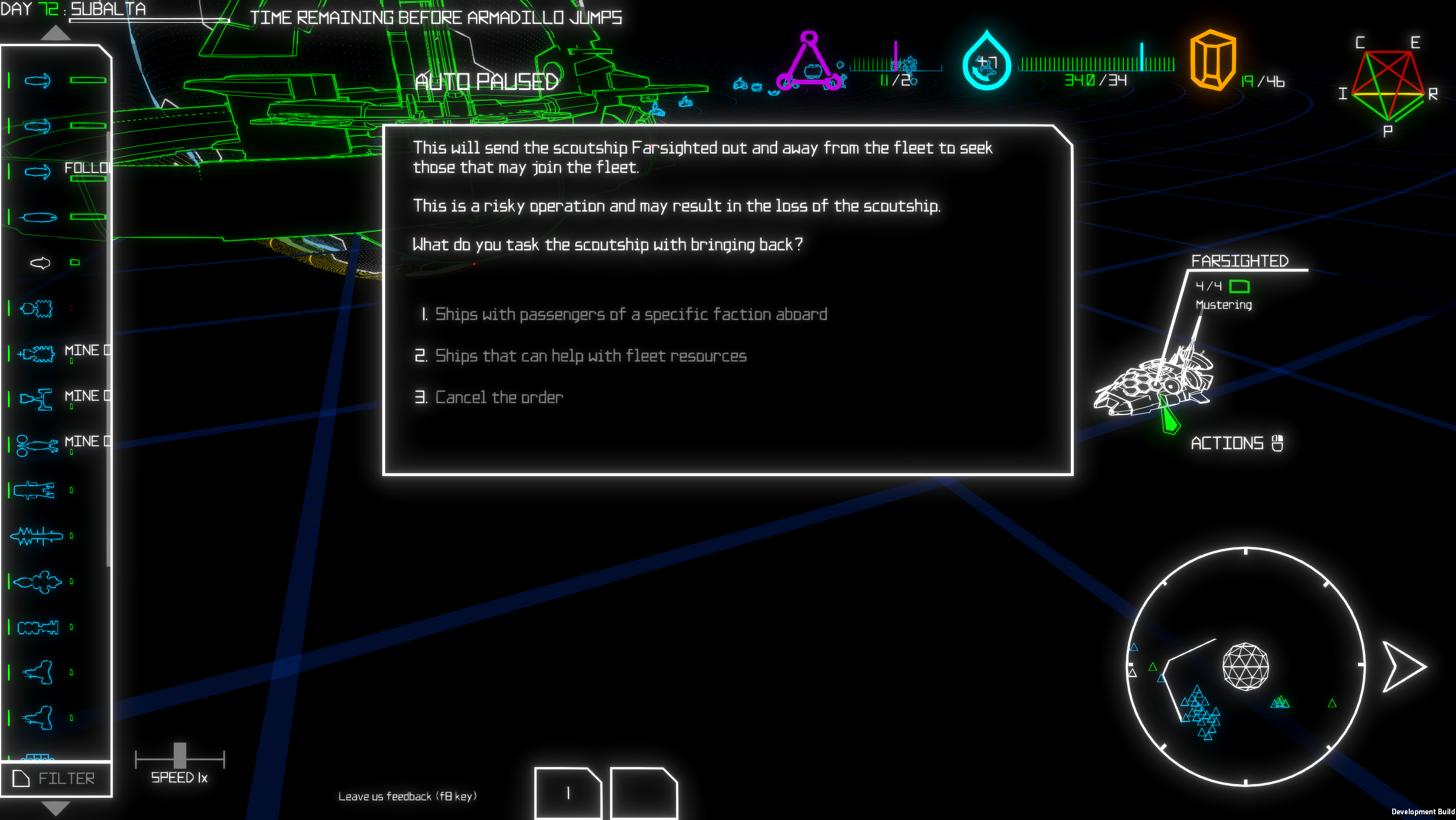 You can now launch boarding parties against Harvesters. Stations can also now be boarded, giving you quite a number of options to choose from should you successfully land a party aboard!

We added quite a few new missions in this update, as well as some different options to existing missions.

have always occurred when the fleet can’t keep up with the demands of a thirsty fleet. Starting with v1.46 you have a variety of options at hand to stave off the worst before riots tear the fleet apart, including the option most favored by governments worldwide, ‘do nothing.’

We continue to add depth to different actions. Not to give too much away, but for example more interesting things now happen if you seize a disabled non-fleet ship for too many days.

Confiscations can now be attempted on stations that have cargo.

We worked a lot to make the game easier in beginner mode. More beginner starting missions and an easier end game are the most obvious improvements, but there are quite a few changes to events and early gameplay that should help there. We still have some work to do on that front.

Having said that, XO is probably never going to be an easy game. Do make use of that spacebar to slow down the pace and consider your next move!

Diplomat: earned when you become allied with all factions at the same time in a single run, this powerful starting fleet grants you an Irenic Gatherer for early ore mining and fleet defense, and an Irenic Farmship. You begin neutral with the Irenic and on a warlike footing with the Empire. 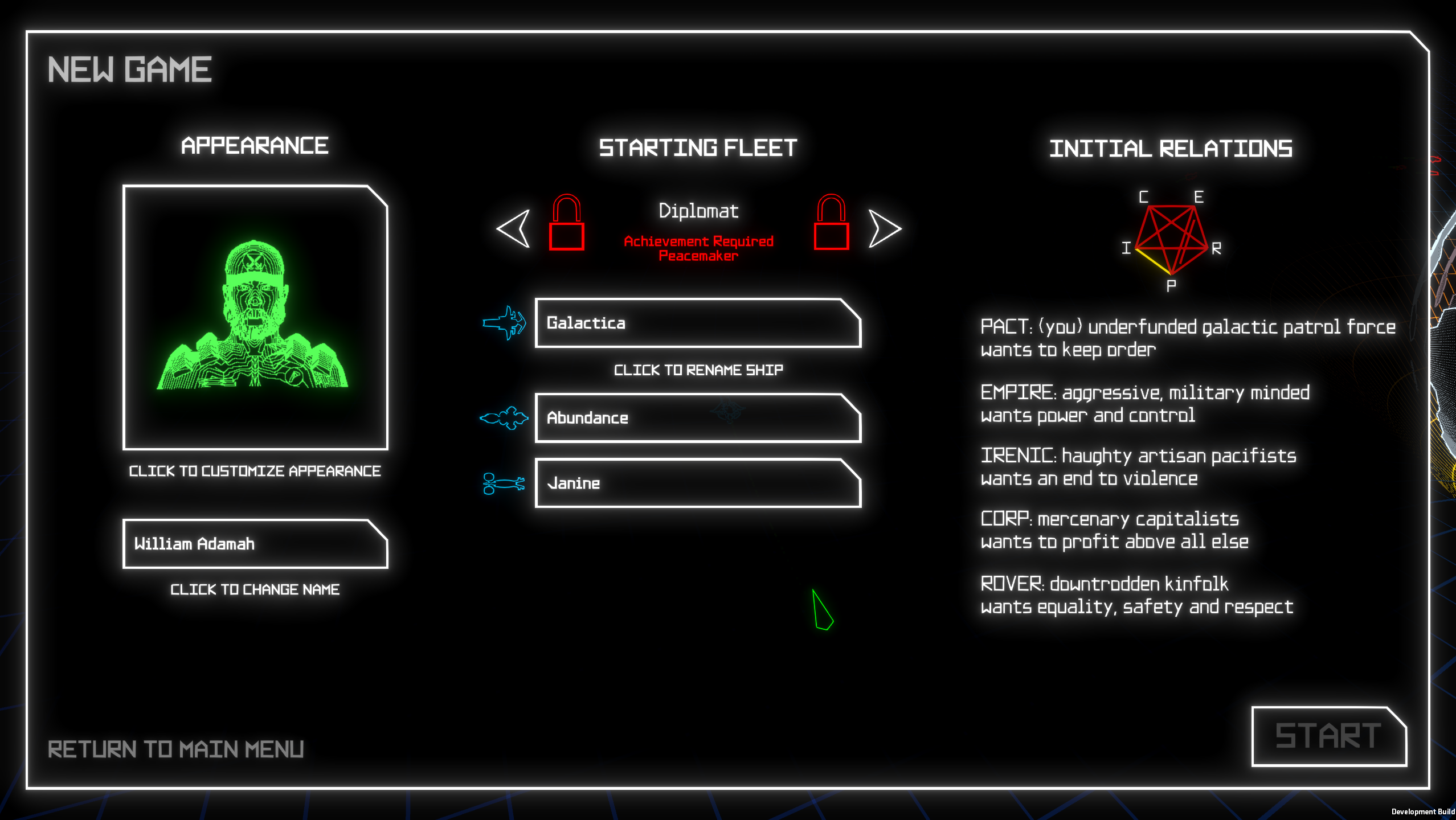 Admiral: awarded when you achieve tactical victory, this starts the game with a Battleship, Frigate and Scout.

Hard: also unlocked with tactical victory, this starts you off with a weaponless Battleship, warlike with all factions, surrounded by Harvesters with a much faster propagation wave. Score is doubled.

We adjusted the camera to allow a fully top-down camera. Hold the right mouse to pan the camera and use the scroll wheel to zoom in and out.

Thanks to our awesome community we were able to track down and fix a lot of bugs and exploits. A short, non-comprehensive list: 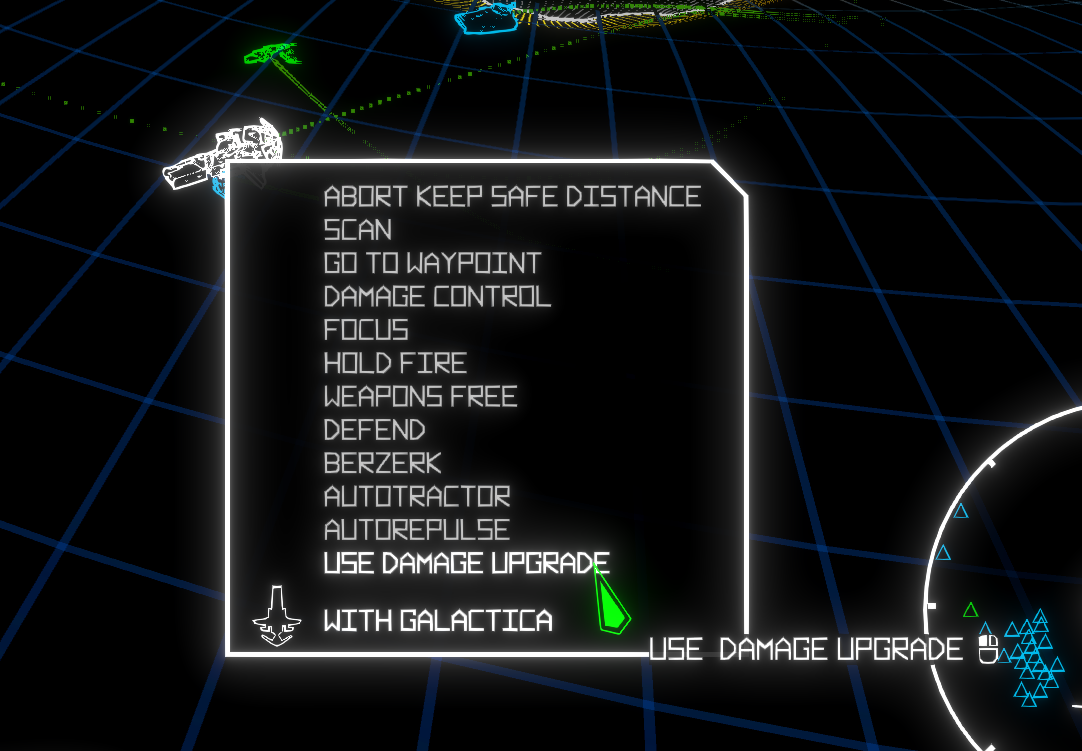 Thanks to your feedback, ideas and participation XO keeps getting better!

Version 1.47 should include a major update to movement, unless it doesn’t.

But we will for sure be adding more ships, more missions and additional depth to the fleet side of the game. If you have ideas for ships, items or missions you should plot a course to our Discord where you can directly suggest features and vote on them!