by Brian Jamison on May 1, 2022 in Uncategorized

Welcome to 1.45, our biggest update yet!

All ships can now equip a tractor beam. Tractors use lots of fuel and can be temporarily disabled by ion torpedoes. Tractors have a lot of uses:

All movement commands now give you the ability to precisely choose where the ship will position itself with respect to the target.

Hold down the CTRL key while left clicking any movement order such as Attack, Follow, Support, Protect, Nuke, etc. to enable precise positioning.

This also works with multiple ships and formations.

The Irenic Argosy is the Irenic ship of plenty, capable of manufacturing Intoxicants and Snacks that can be sold at any trade location for a handsome profit.

The Pact Armored Refueler or ARF is a smaller tanker that can also package spare fuel into cargo containers for rapid resupply in combat or sale at trade outposts. As its name indicates, this ship is also lightly armored. Good doggie.

Dealing with ships that have been forced way past their normal operating limits has always been part of XO. This used to be totally random, and not very fair as pointed out by a few players.

We have heard you! In 1.45 we’ve reworked all of those events with a maintenance simulation that puts interesting choices into your hands.

Here’s how it works:

Once you are deeper into a run, Industryships, Farmships and Cargoships will begin to notify you that they require maintenance. 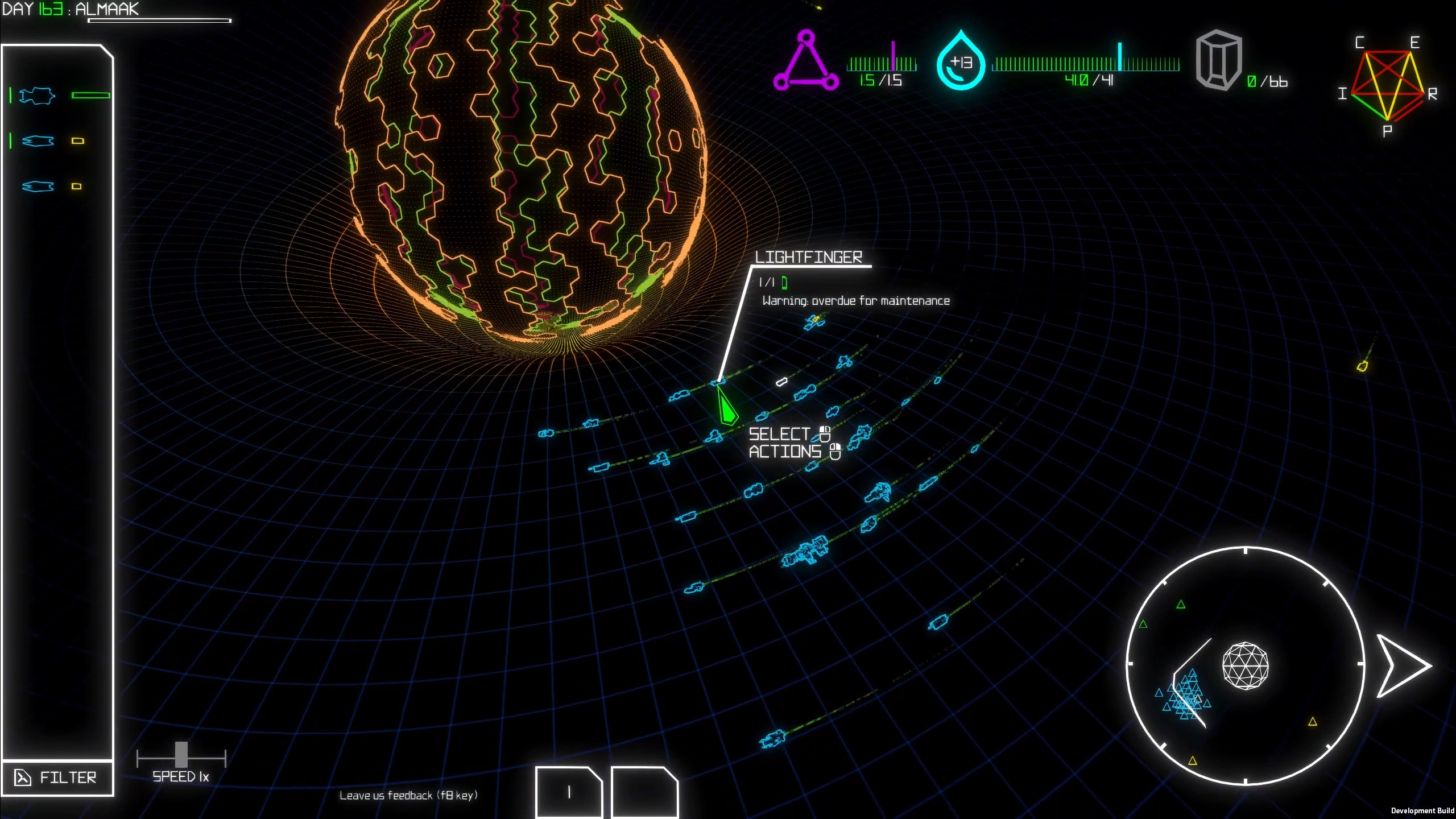 Maintenance requires one day and spare parts. Spare parts are relatively cheap and can be obtained through trade, by activating distress beacons, or by cannibalizing other ships using a Pirate boarding party.

You can choose to defer maintenance on a ship, but the more jumps you wait the more likely something bad will happen to that ship.

Once you install spare parts on a ship that needs maintenance, it will no longer require maintenance for the rest of the run. 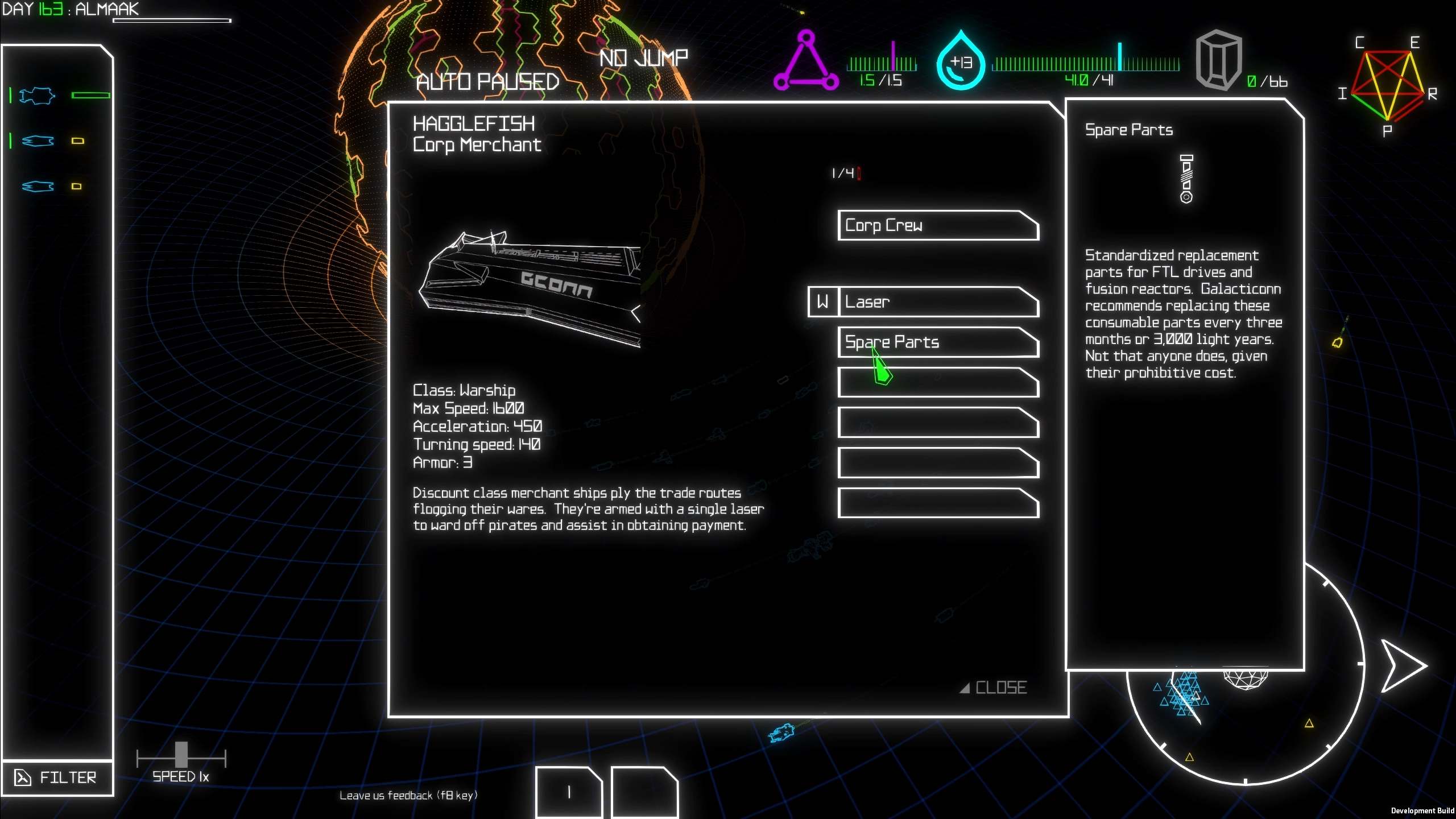 The longer your run, the more ships in your fleet will require maintenance.

If you choose to cannibalize a ship for spare parts, that ship becomes Gutted. Gutted ships cannot jump by themselves (unless spare parts have been re-installed aboard). Note that Disabled ships can be gutted.

This new mechanic (see what I did there) replaces all random ship disaster events that used to disable Industryships, Farmships and Cargoships.

At this point just about anything bad that can befall your fleet is now preventable, and also addressable before things get too out of hand.

It will probably need some balancing and other tweaks, but I look forward to hearing your feedback!

Added an impossible/insane mode medal for dying without pausing. Hint: use that pause!

Mining lasers no longer increase in price during a run

Your chances for coming across ore-producing ships were greatly increased

Lasers can now be added to MegaFixers

Laying minefields no longer triggers automatic enemy ship aggressive actions, but being hit by a mine sure does

Did a full logic rework on boarding actions for consistency

We added better camera control. The scroll wheel no longer selects ships, instead it zooms all the way in to a ship and quite a ways up and out. Looking forward to hearing your feedback on this one!

Right clicking with selected ship(s) automatically moves them to a waypoint, not sure why it took me so long to do this lol

Temporarily exceeding your ore capacity while paused (by melting weapons, using ore cargo, etc) is now allowed so that ship actions that take more ore than your current capacity can be started

Many ship items (such as repairbots) can also be used by right clicking the ship they are equipped on, giving you easier control

Ship abilities and benefits have been made clearer and easier to see, both when scanning and also when hovering a ship in your fleet list

Weapon hardpoints, gunboat hangars and cargo holds are better explained in the UI

Made improvements to the Captain’s Guide and updated info for 1.45

A ship’s class is now shown on the scan dialog

Fleet ship details are now available in the starmap

If a ship is repaired between a destroy order being issued and the weapon being fired, don’t destroy the ship when hit, just damage it

Gunboats continue to be repaired through jump

Individual mines can how be hovered

The main menu got a little more active

Harvested worlds no longer steal a trade event in sector 1

Literally dozens and dozens of other bugs were fixed