by Brian Jamison on June 1, 2021 in Uncategorized

While our last three updates have been very large, this (also very large) one brings the most game-changing aspects. We have much more in the works but this should be the last of the large updates. More on that below.

Thank you to our players and our terrific Discord community! We’ve listened to your feedback and ideas and you will see a lot of that in this release.

Instead of one large galaxy, we’ve broken your journey into five smaller sectors. The number of jumps in a run should be about the same.

Each sector is controlled by a jumpgate. Jumpgates must be unlocked to proceed to the next sector, and there are a variety of methods to do so including fleet battles and diplomacy. 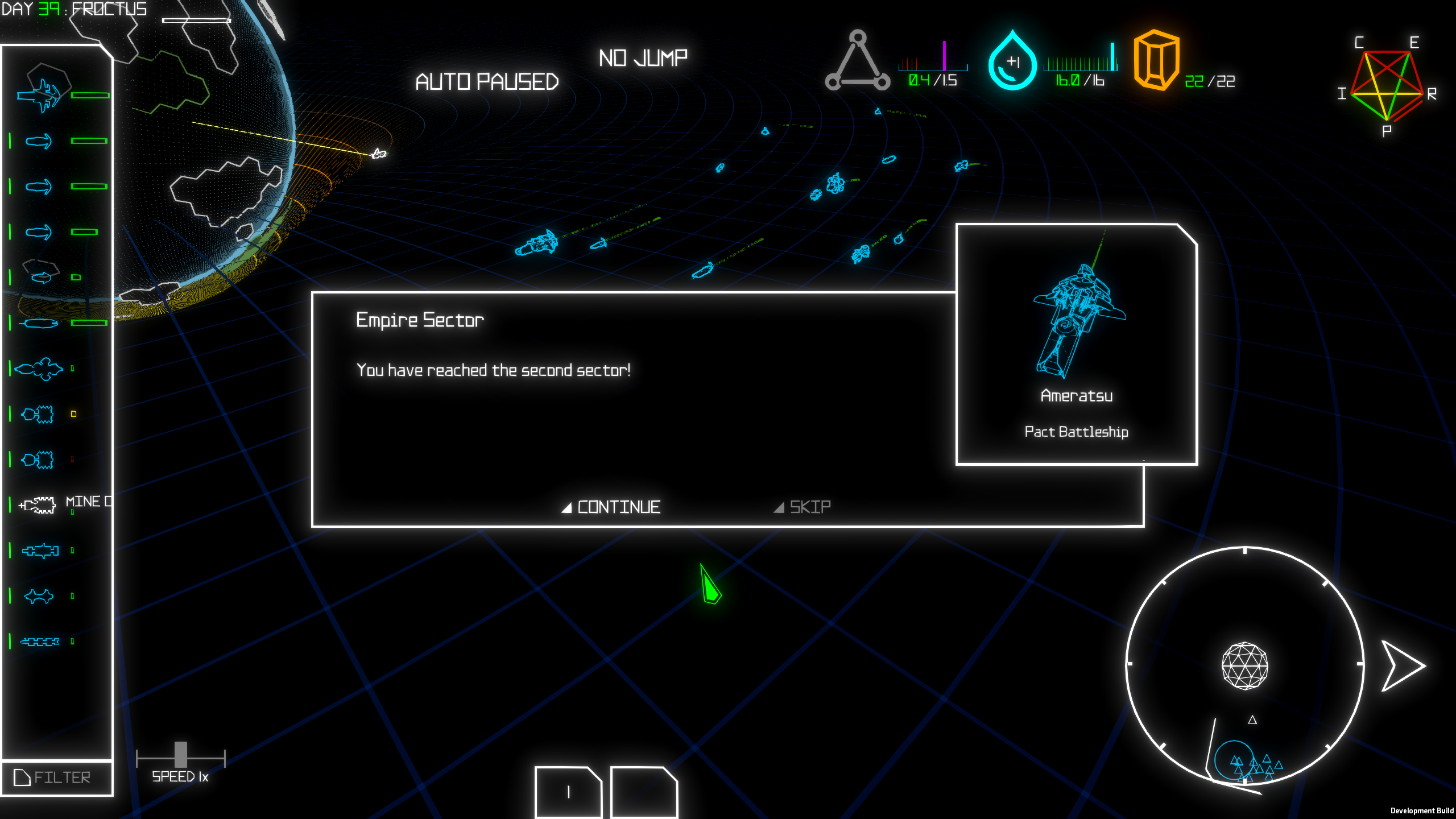 Most sectors are controlled by a specific faction, giving you a larger degree of strategic choice as you build your fleet.

Certain faction-specific events will now only occur in a faction’s sector.

This affected many aspects of the game, and while we spent a lot of time testing and tweaking, it’s almost guaranteed there will be things we missed. Please let us know if you spot anything!

The starmap and galactic map are now combined. You can now rotate, zoom in/out and toggle between faction or planet type views! 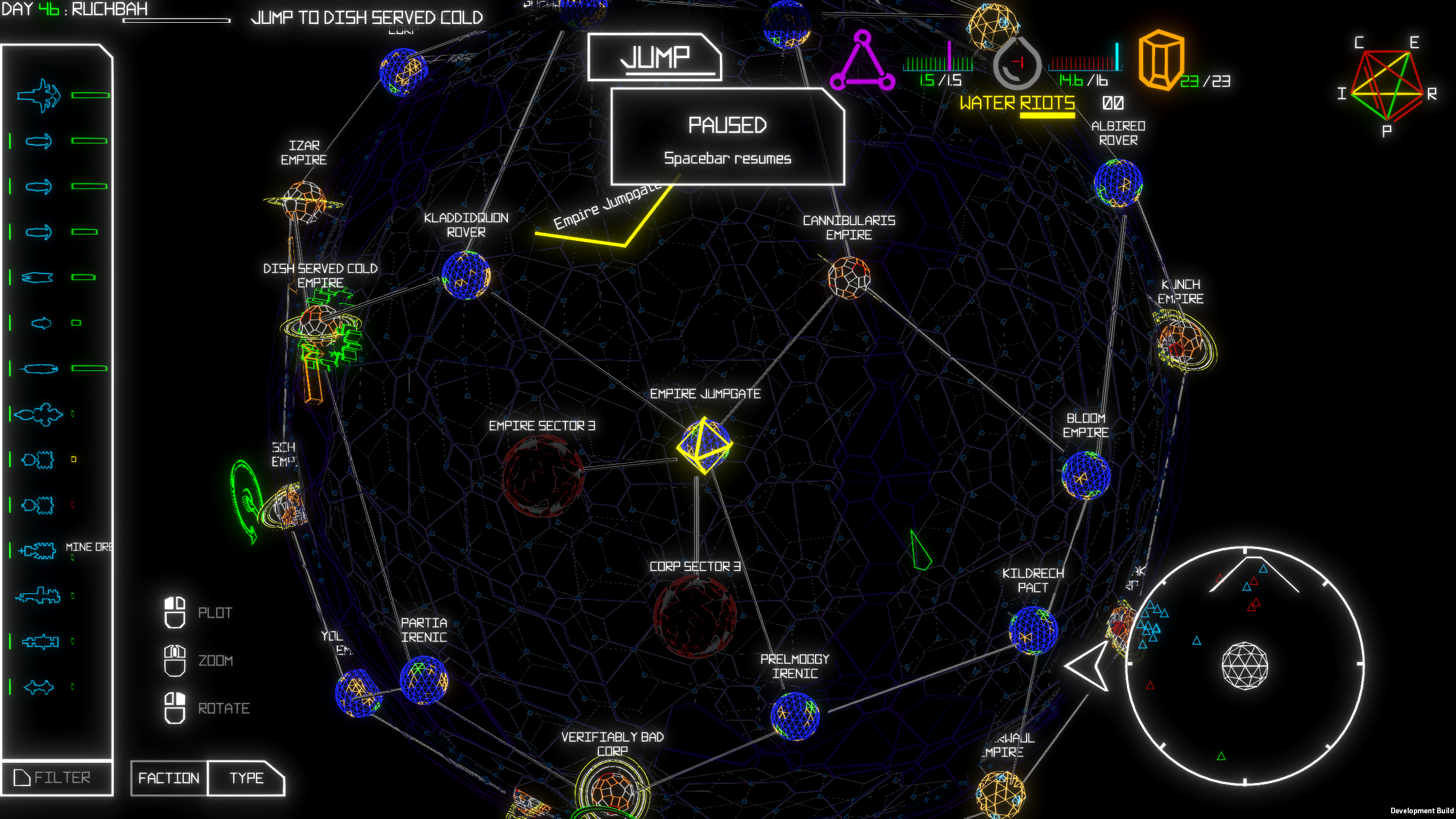 The Harvesters now propagate planet-to-planet instead of in an expanding wave. There is a noticeable visual change that clears up some graphic problems in the wave-based method, and is now 3D.

Overall the speed of the Harvester propagation wave was greatly slowed, allowing much more time to explore a sector and engage in combat. 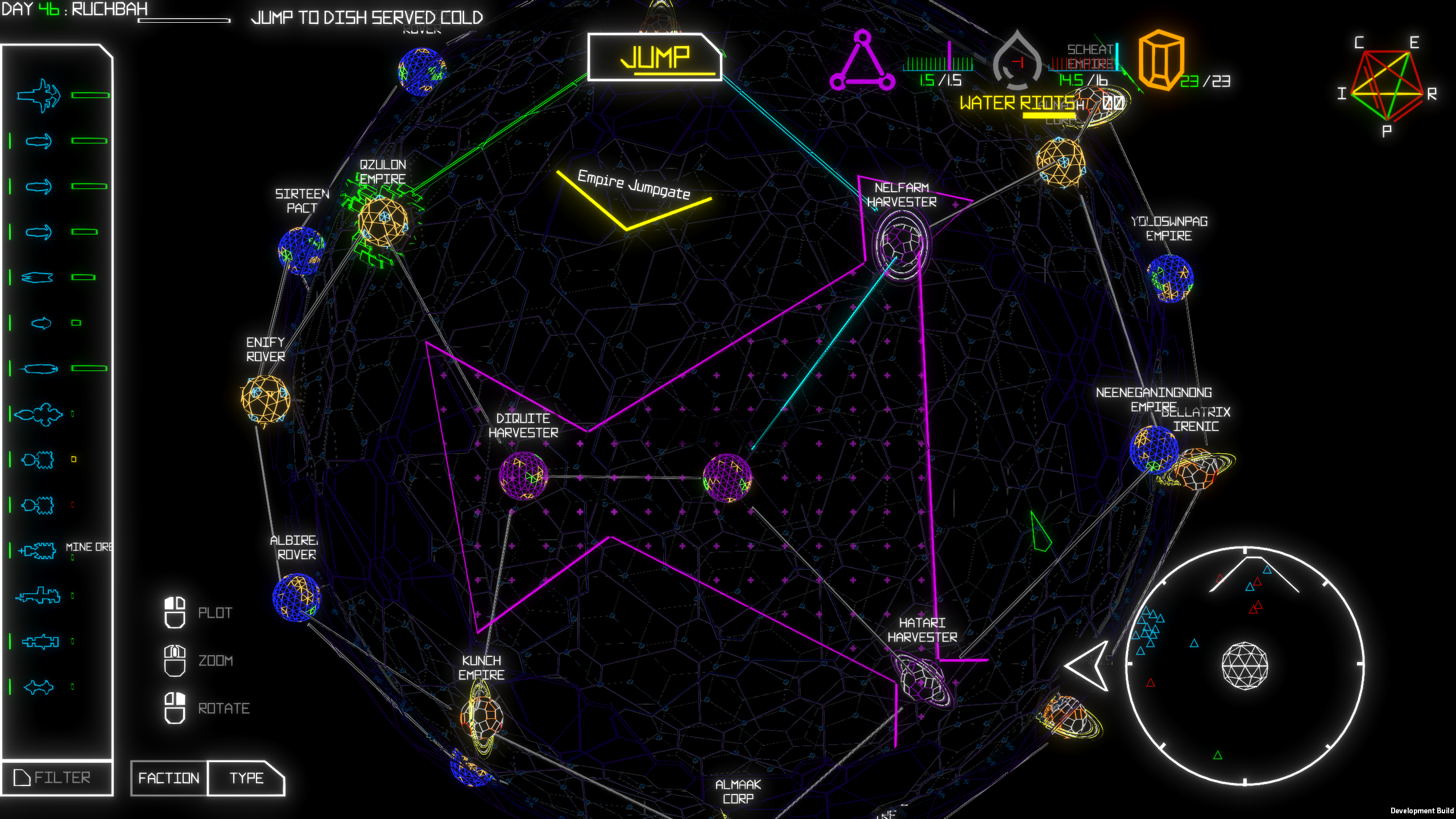 When Harvesters arrive, they do so much more slowly, although larger and deadlier ships will show up over time. Harvester Reapers are also much slower.

Charging time was increased for all weapons, resulting in slower, more strategic battles.

Several ship stats were adjusted to further differentiate certain warships. In some cases, slots were added. Gunboats received the largest changes in anticipation of 1.42’s carriers.

We’re most of the way through overhauling the events. Most combat timers have been removed, allowing for longer, more strategic combat. We’ve vastly cleaned up the narrative, and refactored quite a few events to give more interesting options. This is an ongoing effort.

The tutorial was improved and polished and a victory event was added.

Faction leaders no longer appear randomly, but only in quests based on certain parameters being met in faction-owned sectors.

I plan on creating many more events, so I vastly improved my event creation tools. It’s now much, much faster to create events, and I’m finding that I am creating more interesting and varied events as a result. Events now run the same battery of automated tests that I use for pre-launch testing, but they do it before I even try them out, massively cutting down time wasted chasing down syntax-related bugs.

Future updates will be more frequent from here on out. We are now focusing on adding new ships and items, additional events and QOL improvements. And while we don’t have a release date yet, we will be raising the price of the game one more time, reflecting all the new features and months and months of work we’ve put in. So now is a good time to buy before the increase!

There is still time to get your feedback in and have an impact on our development, but that window is closing.