by Brian Jamison on June 12, 2015 in Uncategorized

The enemy you face in XO has many types of ships. The most common is a group of three ships that were purpose-built to work together. What purpose, you ask? To cart off most of humanity.

The carrier is essentially an enormous fuel tank and a big interstellar drive with attachment points for other ships. Oh yeah, and a big cage for captured humans. The carrier itself is weak, though it holds hundreds of small swarm fighters and the powerful harvester. 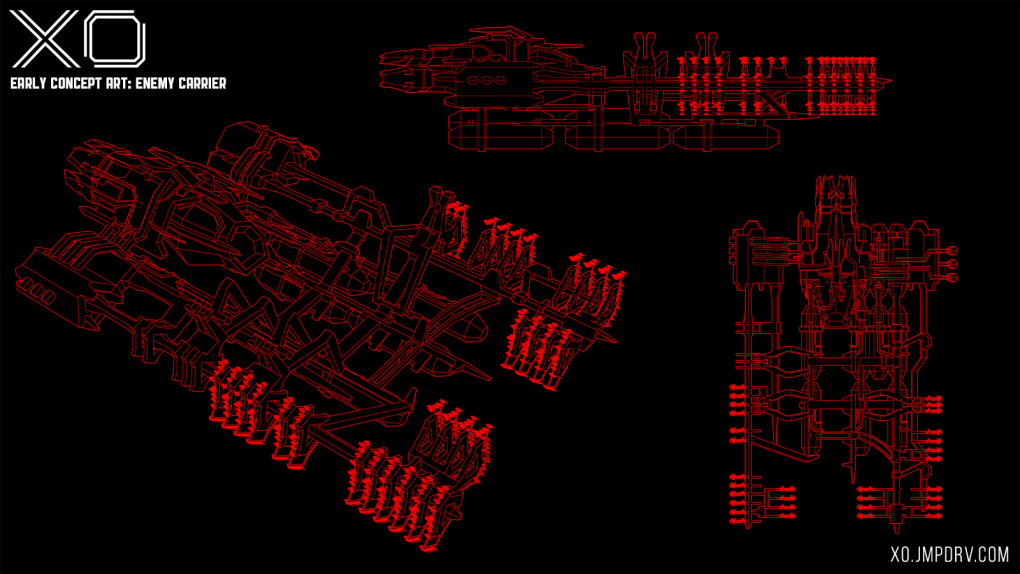 We put quite a bit of that asymmetry work into the carrier design, but it really shines when you look at the harvester.

Originally the harvester was going to be this little carrier-launched shuttle that would rush out and latch on to disabled ships, suck the people out, and then blast back to the carrier.

But the harvester seemed to strike a nerve, because everyone I talked to about it asked if you could attack it, could you blow it up, could you get your people back… So we decided to make this specific ship play a larger role in the game. 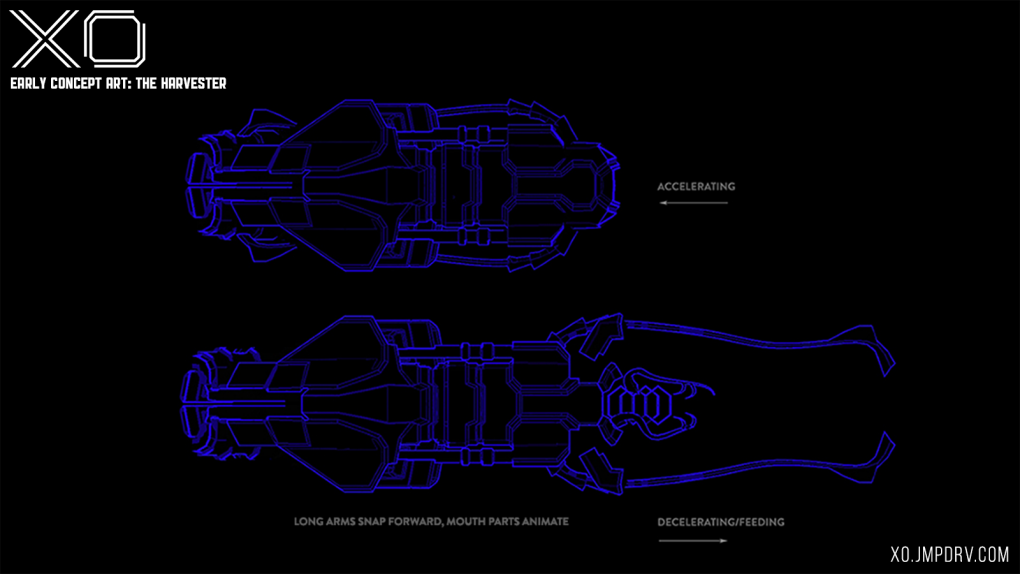 The first step was to scale it way up; it now stretches out to 750 meters long. That’s three quarters of the size of the battleship, but instead of the enormous mass that comes with a jumpdrive and jump fuel, it has more armor and weapons. The harvester turned into a real beast!

Most of our design iterations focused on the idea of different grappling types: mechanical tentacles, organic gripping mechanisms, gantries or docking arms… but every time we went in that direction we ended up with some sort of sea monster looking thing, or a bug-like ship, and that didn’t fit my vision of the enemy. After quite a few tries at this, we stepped back and let the ship’s purpose dictate the design, which got us our distinctive ‘H’ shape. I swear it’s a coincidence, but it does make the harvester clearly recognizable from a great distance when you see a big ‘H.’ 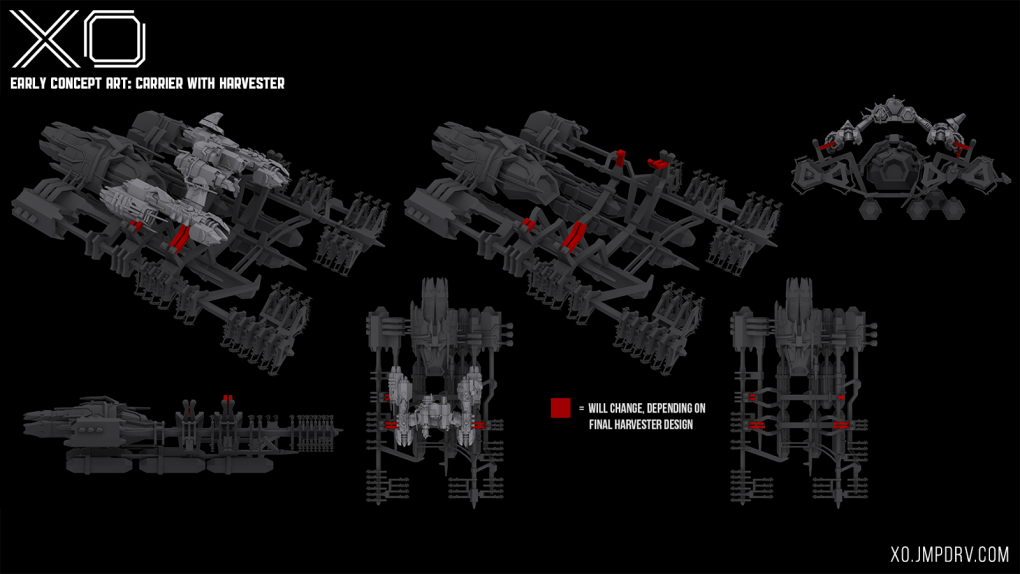 Once this thing clamps onto a disabled ship, those aboard are forcibly abducted. The ship is wiped clean, and the people are taken back to a carrier. You can still attack the harvester, but as you can probably imagine, you’ll need a massive amount of firepower… and it’s not going to end well for those poor souls onboard.

Traditionally we’re used to seeing enemy fighters launching one at a time from a deck, or from tubes like they do in Battlestar Galactica. The direction I gave Brian D. initially was a giant ship where smaller ships bloomed off, almost like a blowing seeds from a dandelion (sounds menacing, right?) I wanted to see the entire swarm launch in a big, threatening mass. 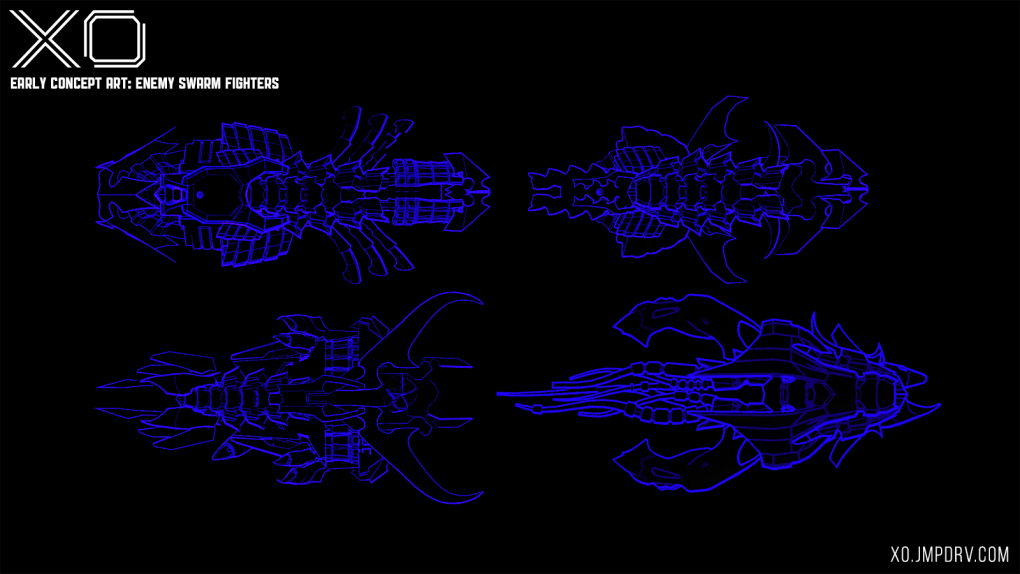 The swarm fighters are much more maneuverable that any other ship in the game; they use an engine that allows them to vector thrust in any direction without turning. I always had this idea of them being insect like, and we succeeded in making them feel like real pests in the game. They are sometimes hundreds of fighter in a swarm, and fending them off can be pretty irritating.

It was really great to read the comments after our last update regarding these smaller fighter ships. It has been rightly pointed out that a space fighter along the lines of BSG’s Viper wouldn’t make sense – economically and militarily. We agree; the traditional naval forces in XO won’t use fighters.

The enemy, however, has ships that were designed for purposes other than fleet battles. The swarm fighter is one of them. The enemy fighter’s primary role is disabling civilian ships, not engaging with military forces. Military ships chew fighters up – as long as the swarms are small. As we’ve said before, nobody knows if the fighters even have crews. And unfortunately, the enemy is not volunteering that information.

Deployed in swarms of much smaller ships, they’re more than twice as large as a Viper at around 20 meters (LOA) – compared with the smallest of the friendly naval forces, a frigate at 150 meters (LOA).

Our number one goal is to make XO a fun game. If necessary, we’ll throw out science. For example, we are not even remotely trying to model time. It wouldn’t be fun to wait while your fleet traverses the vast distances of space. Keep your comments coming, they are really welcome!

We’re also getting closer and closer to launching our Kickstarter (we’ll announce the specific date soon) if you want a reminder for that, please sign up for our newsletter!