Postmortem: What I Learned At My First GDC

by Brian Jamison on March 11, 2015 in Uncategorized

The dust has settled from this year’s GDC. I sorted every business card I swapped, followed up with new friends, and discussed (in great detail) the feedback I received for XO with the rest of the team. Looking back on the past week, I started thinking about what went well, some mistakes that were made, and how to plan for the next big con. Here’s what I learned: 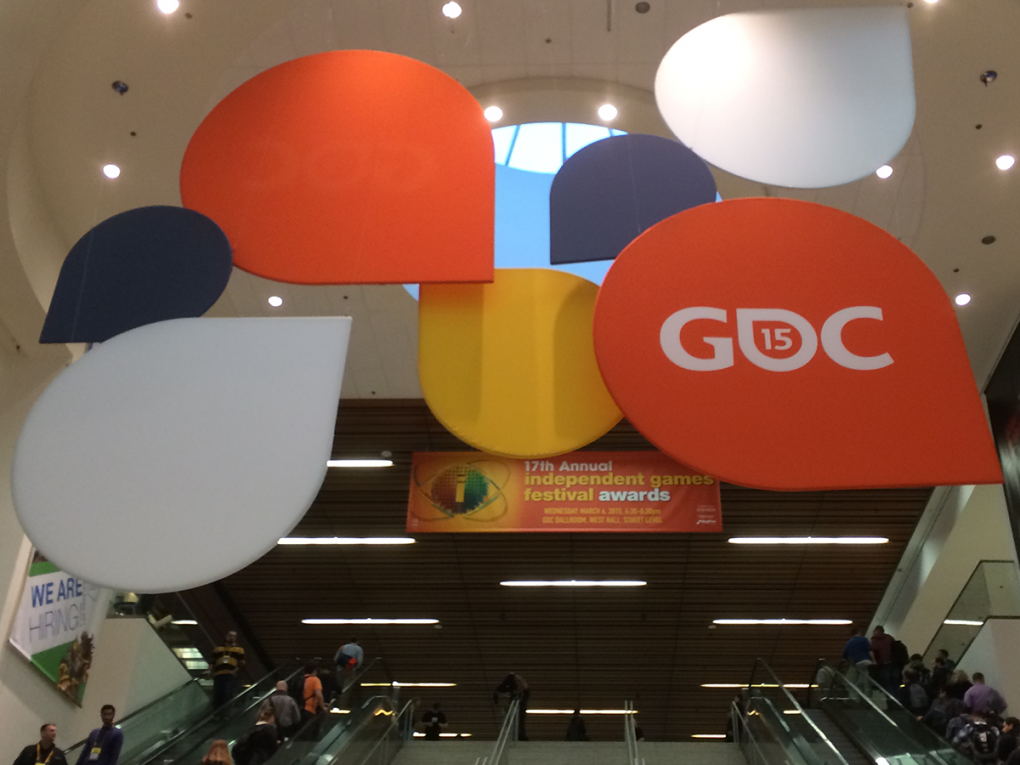 Before leaving for San Fransisco, I researched everything I could find on the Game Developers Conference. Postmortems, tips on networking & pitching your game, and what parties I needed to attend. It helped me set a certain expectation for the week to come, but I learned the most from just showing up and experiencing as many different parts of the convention as I could.

For my first year I went with the basic expo pass. My main goal for the week was to show XO to as many people as possible, gain valuable feedback from players and other developers, and check out some unique booth setups for inspiration (we’ll be out there showcasing our game soon!)

I’m glad I wore comfortable shoes (a tip I read in almost every pre-GDC article out there). I did make the mistake of overpacking my backpack on day 1, however… as cool as it would have been to Streetpass all day, I didn’t need my 3DS on me at all times.  Since I didn’t know if I’d be able to make it back to the place I was staying between events, I brought a fresh shirt, a light jacket, gum, and deodorant to freshen up before hitting the parties. That was a good call. I also packed a couple pens so I could write notes on the business cards I got. I made sure to jot down a few keywords about the people I met right away since my stack of cards piled up quickly.

I ended up staying with a friend who lived about 30-40 minutes away by public transportation. I also had a couple friends staying at the same place. While it was amazing to have free lodging available, I ended up running late every single day. We only had 1 spare key, so all of us needed to leave and arrive together. It’s hard to get a group up and moving on time, especially if your schedules are different, so next time I’ll want to stay closer and make sure I’m able to come and go as I please.  I’ve heard that the hostels nearby are extremely fun, but get booked up quickly.  I’d like to try that next year.

Also, BART and MUNI are 2 separate things – and you have to put your card in the reader as you exit, or your pass gets voided and you’ll be charged for a full trip across town. I learned that one the hard way…

This is, without a doubt, the most important thing I did to prepare for GDC. Let’s start with the elevator pitch. Here’s what we started with:

“XO is a sci-fi RTS game with procedural and rogue-like elements.”

This doesn’t really tell you anything about the game. There’s plenty of procedural mechanics out there, and lots of rogue-likes, RTS, & sci-fi games. Nothing here stands out or catches your attention. After several iterations, we went with this:

“XO is a hard sci-fi game where you command a ragtag fleet of starships against an unbeatable enemy. You’ll be evacuating refugees, scrounging for resources, and assembling your fleet from one jump-point to the next. Your goal is to save what’s left of humanity.”

This hooked the listener almost every time, and usually led to a full demo run-through on my laptop. While I was showcasing the game, I made sure to share details on what’s happening on-screen. Allowing room for questions and feedback is important, and I tried to stop and let others ask questions or share their thoughts as much as possible. The goal was to make my pitch into a conversation rather than a speech.

Along with the elevator pitch, I spent a lot of time working to make all of my talking points concise. I had answers ready for questions like, “what kind of game is this” – “what makes it unique/different” – “so it’s just like ‘THAT OTHER GAME?’” By roleplaying these scenarios with my team, I felt confident and avoided those deer-in-headlights moments when you’re hit with a question you don’t know how to answer. Role-playing can feel pretty silly, but I promise it’s worth it. 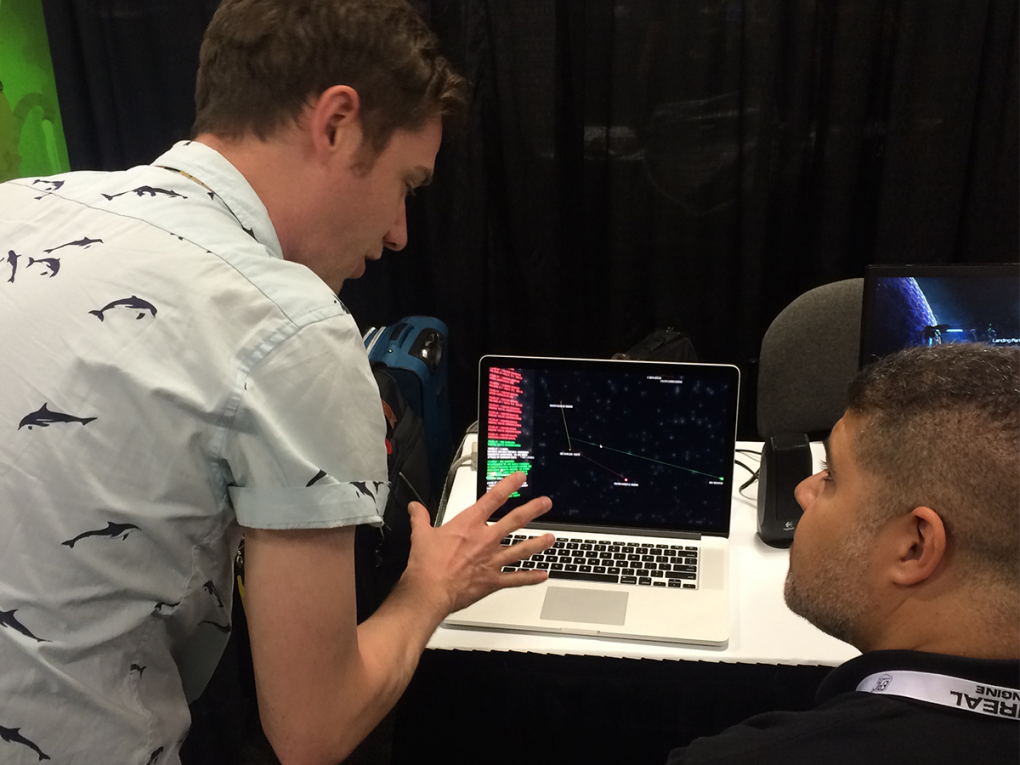 Showing off your game:

It’s easy to let imposter syndrome sink in on day 1 at GDC. It was much bigger than I anticipated – packed with folks from every corner of the game industry, and almost everyone has their own project that they’re just as excited to pitch. However, after meeting other devs, I started to realize that I wasn’t the only one feeling my way through each day. While it’s true that most attendees have their own agenda, in my experiences devs were just as excited to try XO and share their thoughts as they were to show me their own game.

Since we didn’t have a booth, or scheduled demo space anywhere around the convention, I had to improvise with some guerrilla marketing. We spent 2 weeks building a scripted demo that I could run through in about 10-15 minutes, and if I couldn’t get to my Macbook (if it was too crowded, noisy, or an inappropriate situation) I had screenshots and videos loaded in my phone so I could easily show the art style and vibe of the game.

My personal opinion is to not force these kind of opportunities. I just made sure I was showing up to events that allowed me a chance to set up shop. The free mixers and meet-ups were perfect for this, and by changing my desktop wallpaper to an interesting screenshot from the game, I also managed to pull some people in while charging my laptop in the hallway between expo floors. On that note: make sure you’re fully charged! After playing my game in front of people for about an hour, I noticed my battery was completely zapped. Next year I’ll remember to bring a spare. After the first day, I remembered to exit the game and put my computer to sleep whenever I wasn’t actively showing the demo, which got me through the other nights.

Here’s where things could have gone better… I should have been contacting press very early on. As I’ve heard from several sources, everyone gets booked up quickly. I could have tried waving down those with the red “PRESS” flags walking by, but as I mentioned above, I try not to force these things. At the end of the day, I actually met more press during random encounters than by reaching out via twitter and e-mail ahead of time. This leads to another great point: 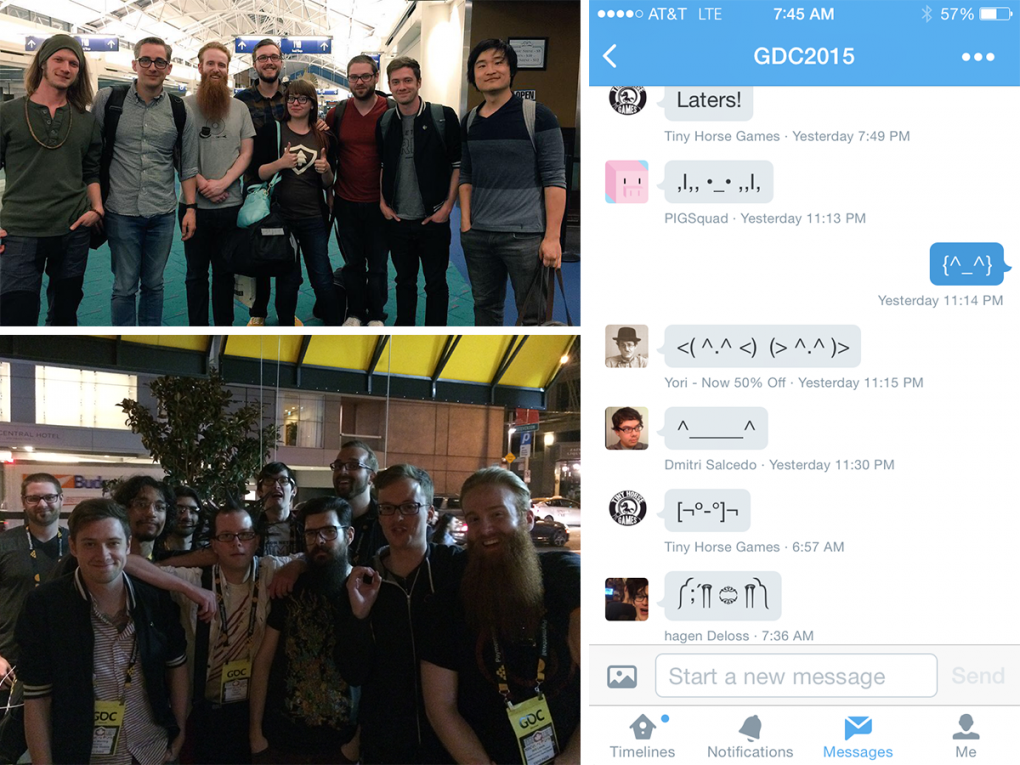 If you don’t know a group of people that are attending GDC, I would suggest finding other devs to meet up with before heading out. I feel that this should be just as important as contacting press, or setting up meetings with publishers. I was very lucky in this instance – there’s a great community called Portland Indie Game Squad here in town, and several members were at GDC all week. We had a Twitter group message going at all times, I played games with friends, and was introduced to twice as many people as I would have been if I was flying solo.  This was the 2nd or 3rd GDC for some of my friends, so tagging along with them was extremely helpful throughout the week.

Go to Wild Rumpus. Go to Pow x4 (it will be 5 next year). Go to IGF awards. If you get invited to a party and don’t have any plans, go. I’d also recommend checking out GameLoading: Rise of the Indies, a great documentary about indie game culture and some of the hot issues surrounding the industry at the moment.  I missed out on Lost Levels, and after hearing so many good things about it, I won’t make that mistake again.

Every party that required purchasing a ticket ended up being worth the price. I wouldn’t freak out if you miss something here and there… I RSVP’d to as many events as I could a few weeks out, but couldn’t make it to even half of the ones I put in my calendar, or simply couldn’t get an invite. I tried to take as many pictures as possible, tagged my tweets accordingly, and mingled my ass off. I also learned a long time ago not to get too drunk at these things.  Don’t forget to drink water, and don’t burp in people’s faces (this actually happened to me a couple times…) 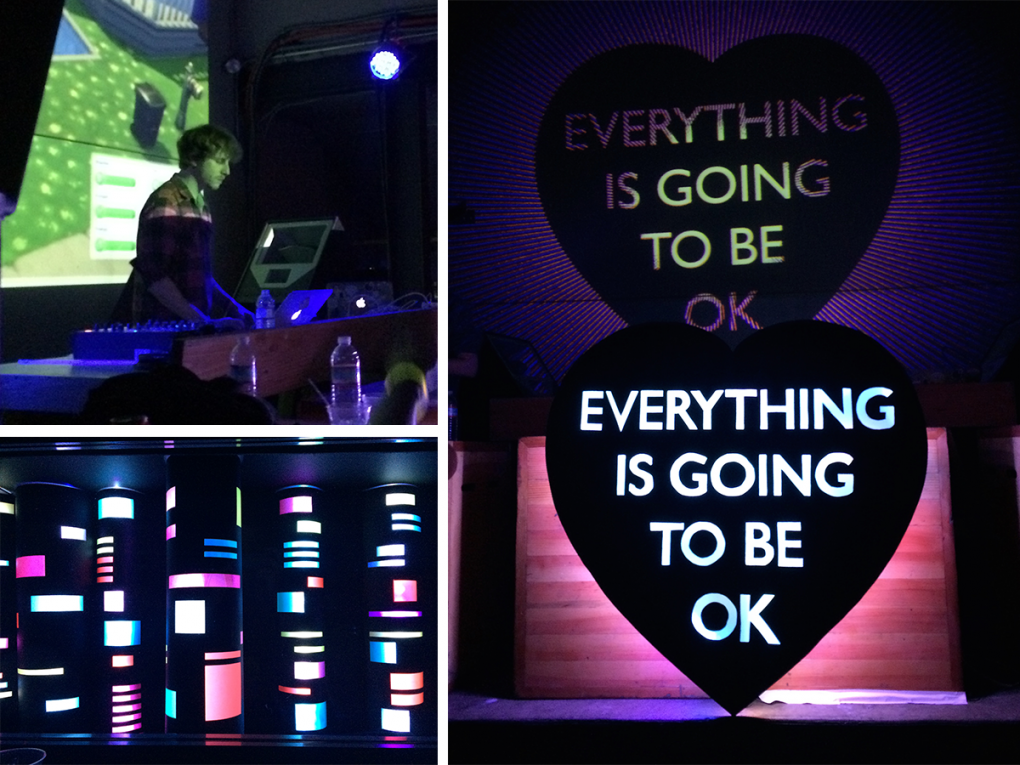 Even though I had never been to GDC before, and I’m not familiar with the San Francsisco area, I had the bright idea to organize a /r/gamedev subreddit meetup close to Moscone Center. While The Eventbrite page had 200 reservations, only about 10 people showed up. I believe this was due to the venue being about 2 miles from GDC (something that could have been avoided with earlier planning and a small budget) and confusion over which day it was happening. I switched the date from Thursday to Wednesday a week before the event to avoid a conflicting party, which didn’t matter in the end since Lost Levels announced their party right after I pulled the trigger. Luckily, I met a handful of very talented people which made the trek out to Zeitgeist worth my time.

Now that my initiation is complete, I can’t wait until GDC 2016… and most likely every year to follow.  It’s also got me very excited for some of the other events we’re planning on attending: iFEST, PAX Prime, Bit Bash, IndieCade, and Indie Game Con right here in Oregon are all on the horizon!