by Brian Jamison on February 20, 2015 in Uncategorized 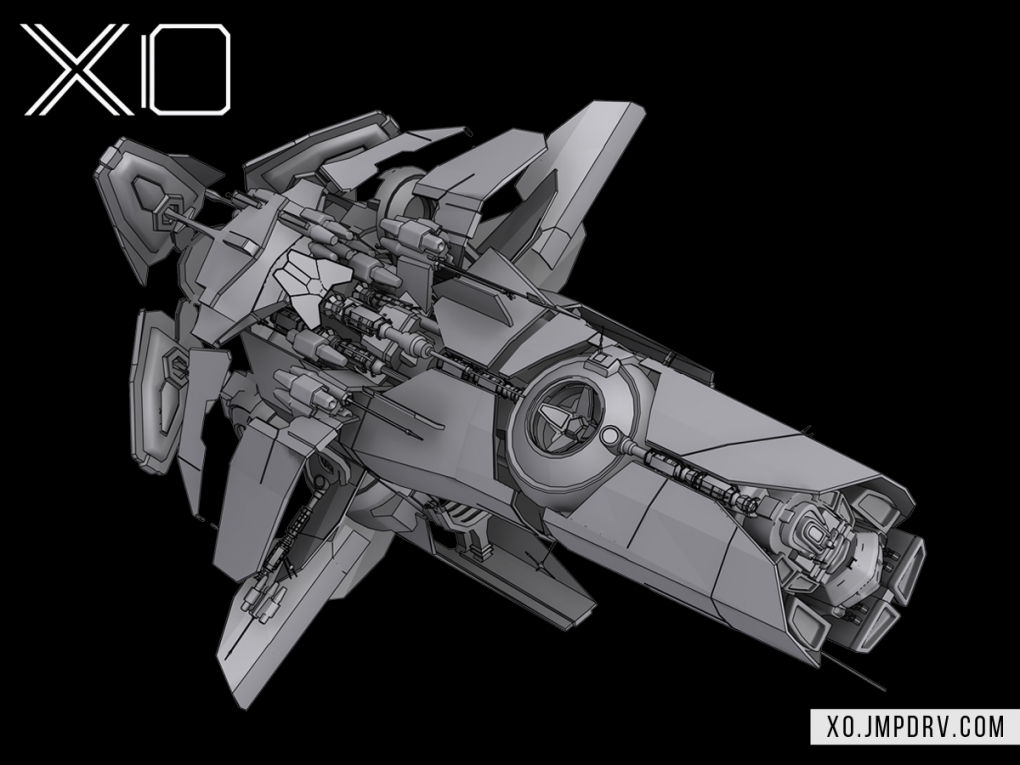 The battleship is one of the most important pieces in XO. It’s the closest thing to the hero of the game. This is a one-of-a kind starship; it’s your Galactica – from there you command your fleet. The fate of humanity is literally riding on this craft, so we wanted everything about it to be remarkable.

We knew it’d be challenging to create a unique, iconic ship. Artists have been designing spaceships for a long, long time now – from the early classics like Buck Rogers and The War of the Worlds to modern works like Firefly and Interstellar.

Being fans of hard sci-fi, we set out to design the starships in XO as realistically as possible. We researched every aspect we could imagine, from the fuel they would likely use to the weapons, armor, and even deck layouts. A few websites were a tremendous help, but shedding nearly a century of starship designs that were more fiction than science required a fundamental shift in thinking.

For example, most starships represented in popular culture are designed like Earth-bound ships that float in the sea; their decks are parallel to the direction of thrust. They assume magical technology like artificial gravity and inertial dampers. Without those dubious things, every time the ship accelerated everyone would be flattened against the walls. Our human ships in XO are designed more like a skyscraper, with the engine in the basement. When they’re accelerating, they provide what feels like normal gravity for the crew.

We wanted a utilitarian look for all the human ships, with nothing wasted on aesthetics, and where function drove design. Because of the cost and weight involved in maintaining pressurized crew areas, the majority of every ship is in hard vacuum. The heavy armor plating our military ships have is angled to help defect or reduce damage from laser and kinetic-based weapons. These hard angles naturally give the ship a threatening form. All of the crew areas are surrounded with water storage to help protect them from radiation and provide an insulating layer. Also, the bridge isn’t visible – it’s located in the center of the craft where it is least likely to be hit. Protecting the battleship from an obvious weakness like an exposed bridge should be a top priority.

Speaking of weaknesses, let’s talk about windows. If you had a battleship in space, there’s no way you’re going to put windows on the thing! They’d be too easy to target with a laser or be damaged by acceleration stress, and looking out a window would expose you to dramatically shifting light levels due to maneuvering.

After briefing our artist Brian Davis on several of these key points, he went to work bringing the battleship to life. Brian knocked it out of the park right away; we made some small tweaks, but the design you see is fundamentally from his first concept. 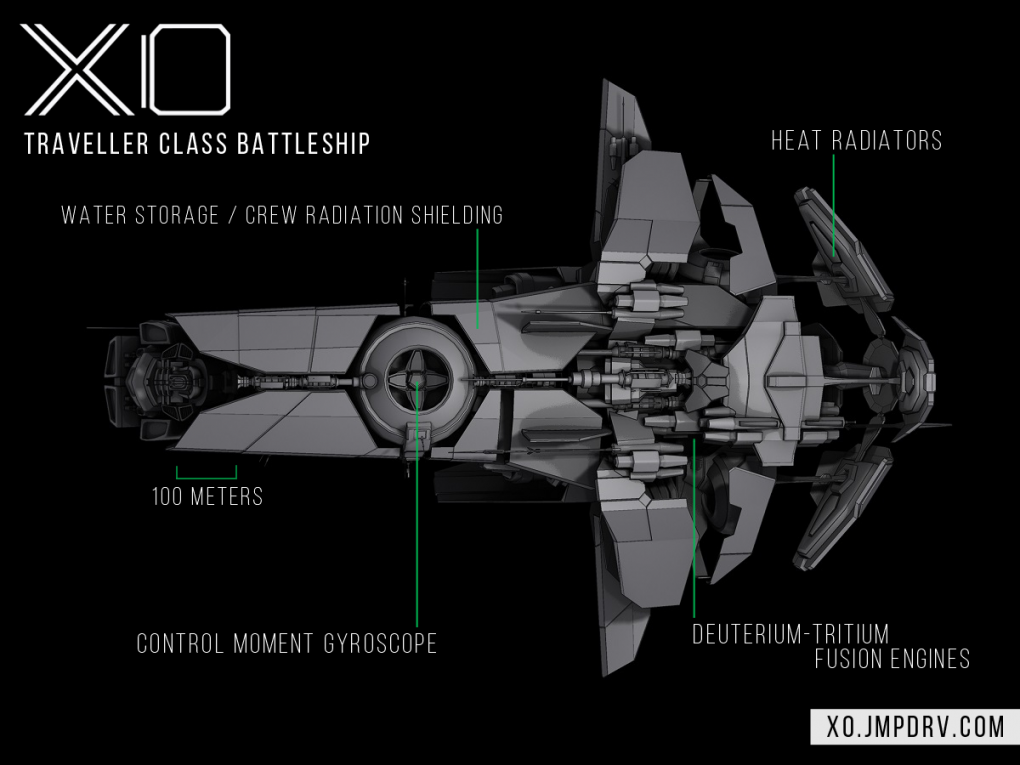 One of the first pieces you might notice is that giant eye in the center of the ship. This is the Control Moment Gyroscope, which helps flip the battleship without using thrusters. This way you’re able to quickly swing your weapons around in the heat of battle.

We wanted this ship outfitted with weapons which would be practical in space combat. Laser cannons, it turns out, are more complex than they appear. They’re only useful if they consume gigawatts of energy. Interestingly, most of that power is waste heat, and if you don’t have a way to dump that heat your ship will literally melt! So we added giant, redundant radiator fins to keep that waste heat under control. The battleship can lose three out of its four armored fins and still keep shooting.

While laser cannons are great for long range combat, they suffer from a low rate-of-fire – mostly from the need to dissipate all that heat. The battleship’s flak cannons are the best bet when it comes to close quarters combat. Battlestar Galactica’s flak cannons from the 2004 TV series were something I’ve always wanted to control. I love the idea of having a ship that could lay down a thick flak screen like the Battlestars were able to do, and was gratified to find that multiple sources cite them as being quite useful in space. The only downside is that they would be easy to dodge given enough time, so they’re best suited for short range defense. The same cannons can also be loaded with a non-explosive round. These are sometimes called point defense cannons, and their kinetic rounds are fired at extremely close distances where ships or missiles can’t dodge them.

The sandcaster is a technology that I’ve always found particularly intriguing. This goes back to my days playing Traveller, one of the first sci-fi, face-to-face roleplaying games. Sandcasters do just what the name suggests; they cast out sand in huge clouds that block lasers. The sand would also damage ships running into it at high speed, potentially destroying them. There’s some debate on whether or not this technology would be effective, but I think it’s too cool to leave out.  It’s an interesting defensive tool that totally changes the nature of space combat, and opens up possibilities for defensive screening that I can’t wait to explore.

Those spinal mount weapons you see are particle accelerators. They pack quite a punch, and their range is better than the flak and point defense cannons, all while using less power than the laser cannons and having a greater rate of fire. On the downside, they require the entire length of the ship to accelerate the particle, so there is a limit on how many you can have.

Your battleship won’t be outfitted with all of these weapons from the beginning. You’ll be scrounging for weapons at military caches and depots, from derelicts and wrecks, upgrading or changing your load-out as you progress in the game. 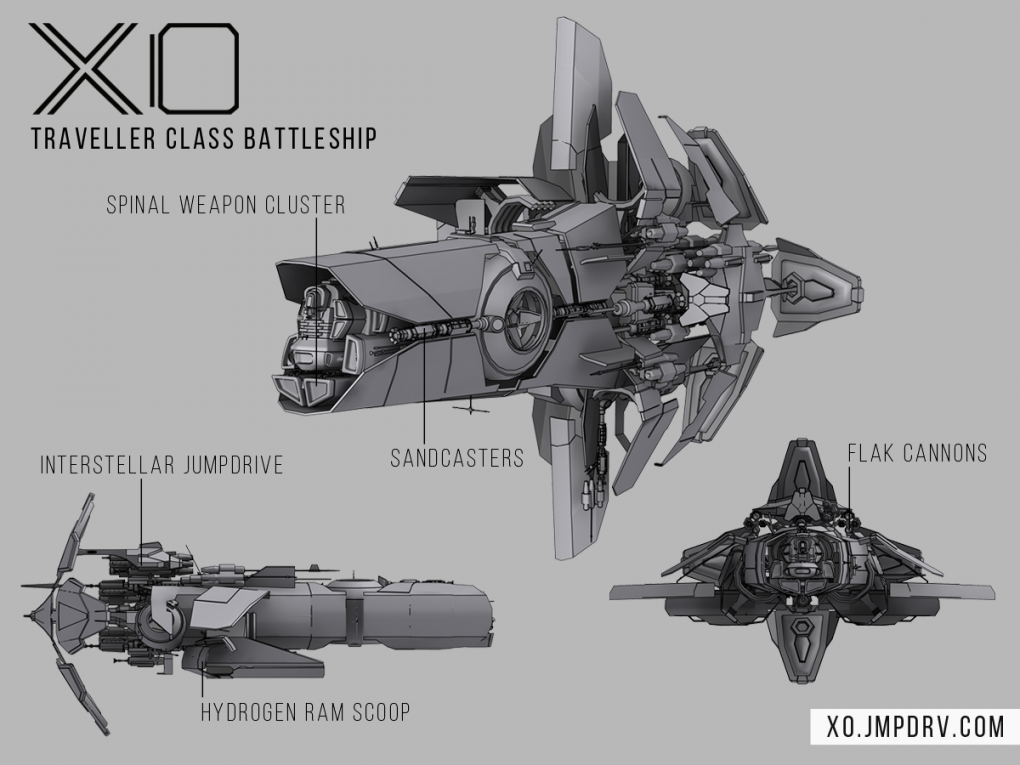 We did have to make one big concession. As far as we know today, there’s no way to travel faster than the speed of light, so one of the elements that falls into the hand-waving department is the faster than light drive. We’ve at least tried to tie it to ideas that are internally consistent – if you have to jump, it would be from one giant mass to another, it requires quite a lot of fuel, and you have to spin up your drives before you can jump, which takes time.

The engines that power the battleship are based on what scientists believe fusion drives will actually be like, using deuterium-tritium fusion. The battleship and several other ships in the fleet are also equipped with hydrogen ram scoops, so they can skim the surface of gas giants for emergency refueling (although there will be several other ways to get fuel in the game). We’ll talk more about fuel in a future post as that plays a large role in the game. 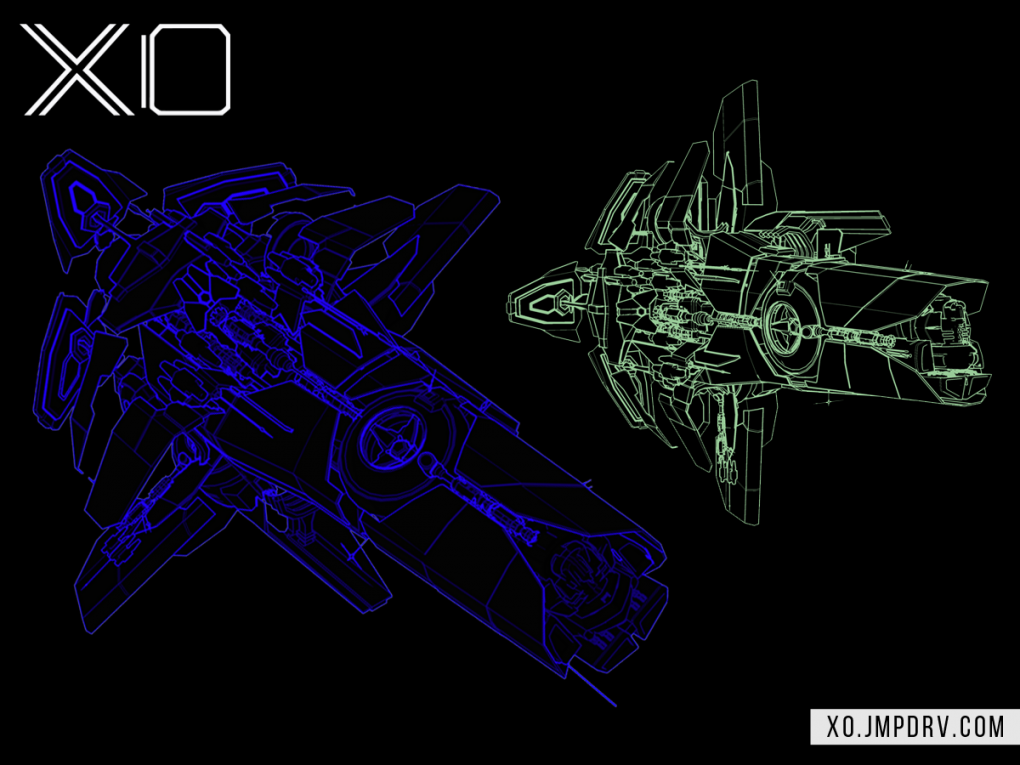 The easiest comparison for the finished look of the battleship is the original Tron movie from 1982, which we’re drawing some visual inspiration from. When we were looking at the Recognizer in the movie, we were drawn to the flat shaded polys. We needed more detail that would translate well in vector and convey the size of the battleship, which you can see when you zoom in close. Using edge detection in Unity3D, we took Brian’s 3D model and created the hyper stylized vectorized ship and dropped it into the XO universe. This brings us to what the battleship currently looks like in the game.

We’re still early in development, but we’d love to hear what you think about the science behind XO, our visual look, or anything else. We’ll be talking quite a bit more about the hard sci-fi approach we’re taking in XO in the near future, so be sure to sign up for our mailing list and follow us on Twitter.