by Brian Jamison on August 24, 2021 in Uncategorized

The Irenic Casino ship generates ore from passengers! When passengers are aboard, right click and select the Market action to open the Casino for business; ore will be created over time at a high cost of water and fuel. Also note that the Casino requires two water whether or not its market is open.

The Rover Planner takes any weapon placed aboard and creates a plan from it (destroying the original weapon in the process). As a reminder, an unlimited number of weapons can be created from plans (given sufficient ore), and a maximum of two plans may be stored at any given time.

The Rover Snarf is able to non-destructively extract weapons from ships, allowing you to move weapons between ships, salvage weapons from disabled or abandoned ships, or even use the Snarf as a type of attack. If you do this, active warships will target and fire on the Snarf if they can! There may be some strategies to uncover there…

You can now rename your battleship and avatar as well as customize the look of your avatar. Your avatar name and battleship name will persist between runs, or until you change it. 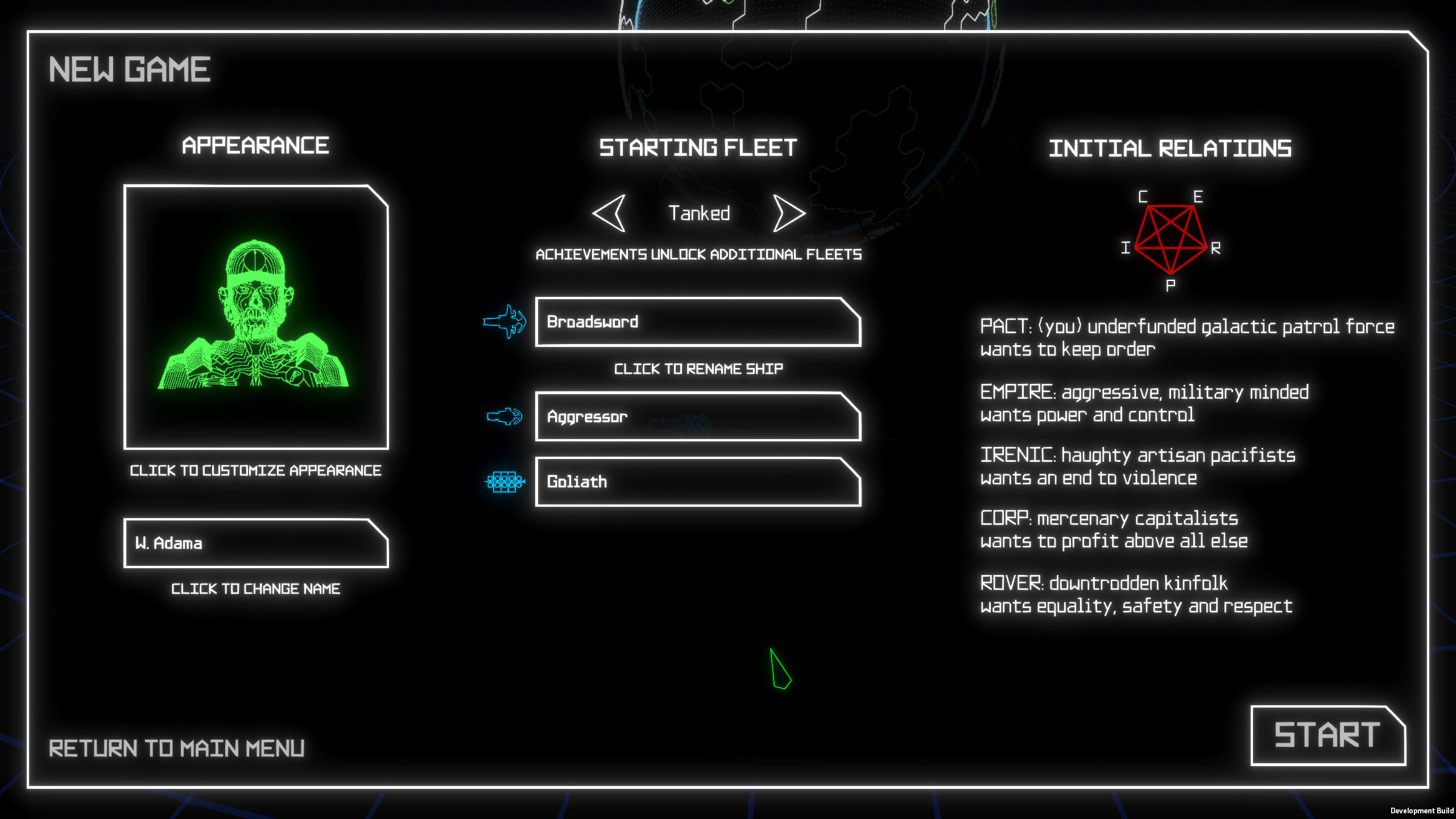 Starting a new game now gives a micro-tutorial if you select the beginner mode. Both modes now start you off with a laser. Only the tutorial starts with a weaponless battleship. Future modes will probably include “OG/Hard” mode with no weapon.

Just for fun we temporarily added a ‘tanked’ option that starts you off double-enemy with everyone, a frigate, a laser and a tanker. 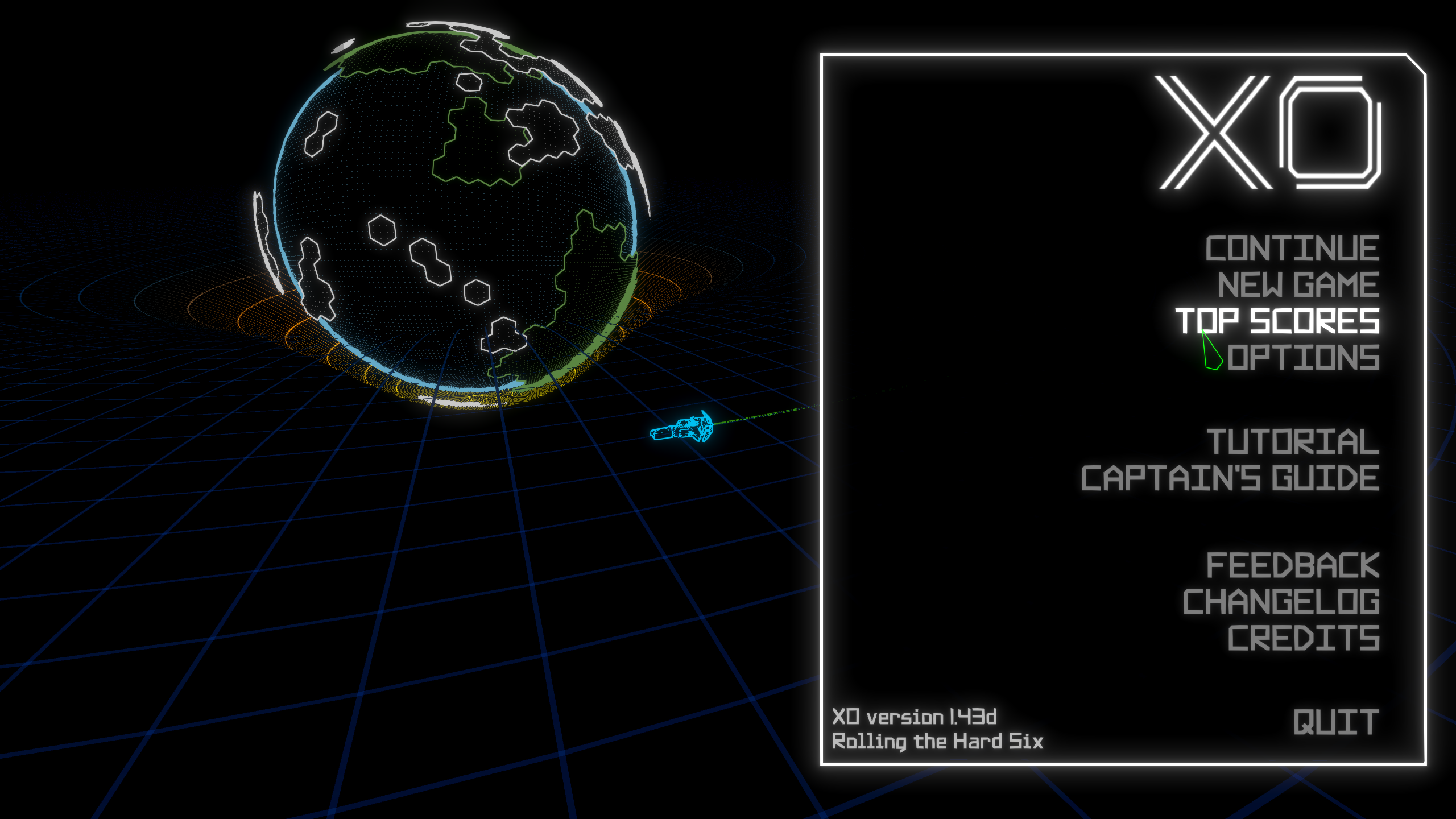 You’ll also immediately notice that we have a proper main menu now. And you now start the game with different ship and loadout options. We plan to add more starting fleet options as unlockable achievements (in version 1.44 or 1.45)

There are four new items! The Supercharger, Overcharger, Extender and Optimizer are low-cost single use items that permanently upgrade one weapon’s stat at the cost of decreasing another weapon’s stat. Look for more such items in v1.44! 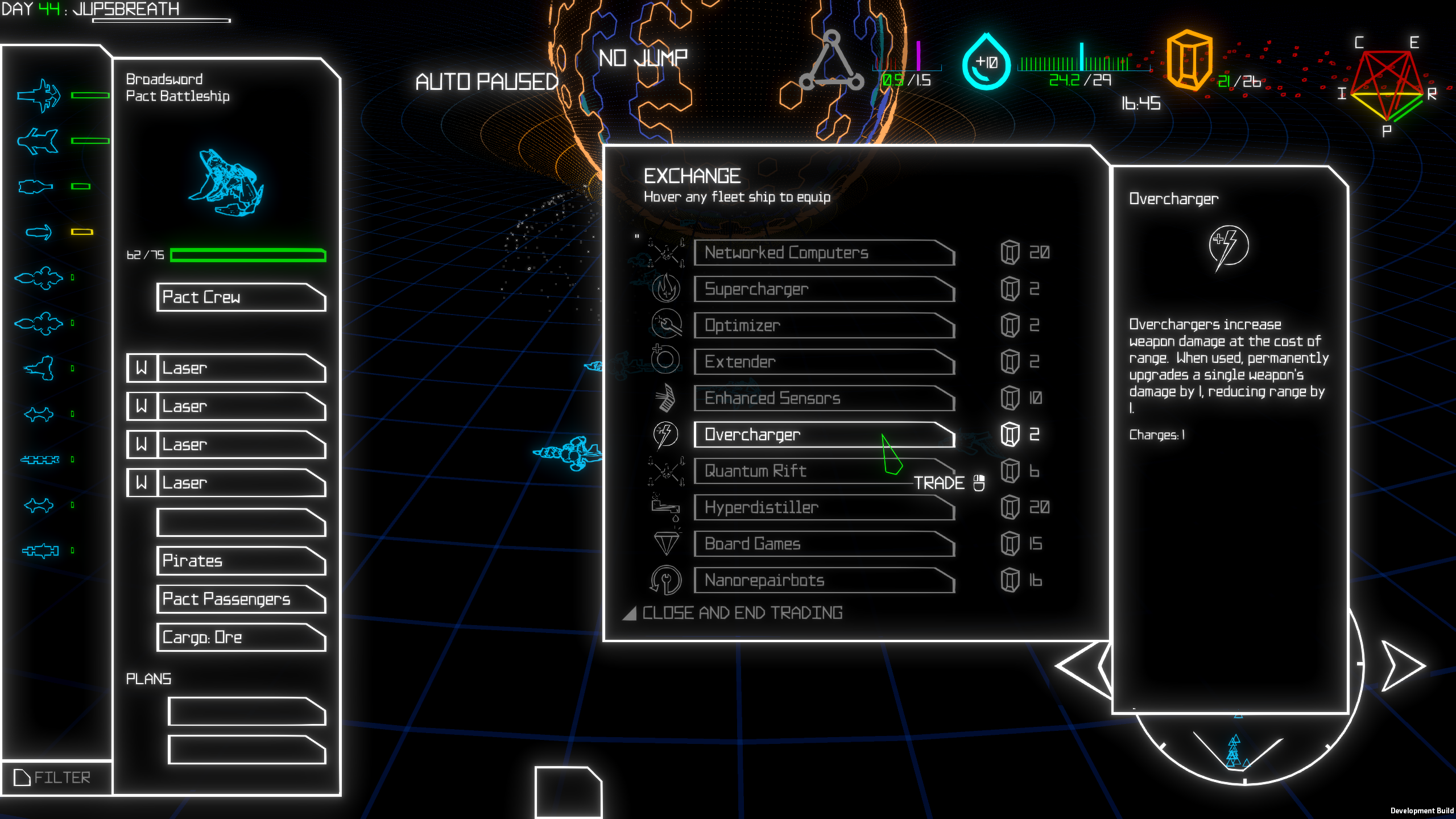 We added a number of early game combat events to match the battleship’s now-beweaponed starting state.

We improved the flow of the tutorial as well.

New Harvester ships were modeled to better differentiate between classes.

The auxiliary can now be seized and repaired.

Boarding parties can now be launched from gunboats.

Added a number of more complex/varied early events as well.

The Harvester wave now starts one or two jumps away from you at game start, depending on which type of new game you choose.

Ships given an attack order no longer switch to the closest target.

Ships purchased at shipyards are now abandoned; you must have a crew or be able to seize them
Covered off an exploit where you could fake a crew transfer and gain control of a ship.

Attempting to extract weapons from a ship that is not yours is now considered an attack.

Boarding parties now work even if a ship has no space aboard due to cargo, other passengers, or even weapons aboard. Cargo is jettisoned preferentially, then passengers, finally a weapon is destroyed to make way for a hostile boarding party if all else fails.

Scouting with civilian ships now asks for confirmation since they can be lost.

Having more than two plans now triggers a ‘discard one’ dialog.

Salvage now works as a self-action when a ship is already seized.

NO JUMP is only displayed where it makes sense (e.g. when jump is plotted but dialogs are up).

1.43 is a result of a lot of your feedback! Thank you for the ideas and support! We addressed a number of bugs that were found by our awesome community, here are the most substantial ones:

Fixed an issue where an enemy ship refused to jump.

Rejiggered the victory dialogs to work with new menu layouts.

Shields don’t switch on until jump is complete.

Also, after this current sale we will be increasing the price of the game!