by Brian Jamison on June 24, 2021 in Uncategorized

Huge thank you to our players and especially our awesome Discord community! Thanks to your input we keep making XO better!

Please welcome the Empire Occupier, our first carrier! You may have seen gunboats from time to time – those Empire ships without jumpdrives? The Occupier can carry up to six of those through jump. It is also able to repair damaged boats, making it a highly valuable ship. Like the Empire Auxiliary, repair takes time and requires ore.

Also new in 1.42 is the Empire Sleeper ship! The Sleeper acts as a farmship of sorts for the Empire. Sleeper ships can put up to six passengers aboard into stasis so they do not consume resources. It takes time, ore and water to put passengers in and out of stasis, and if the Sleeper is disabled, all passengers in stasis will be immediately lost.

We also completed work on a number of new ship abilities! Look for them to arrive in 1.43 and beyond! There are functional ‘test’ versions of several of these new ships in the game right now, but they can only be purchased at the (very rare) shipyard trade events right now… 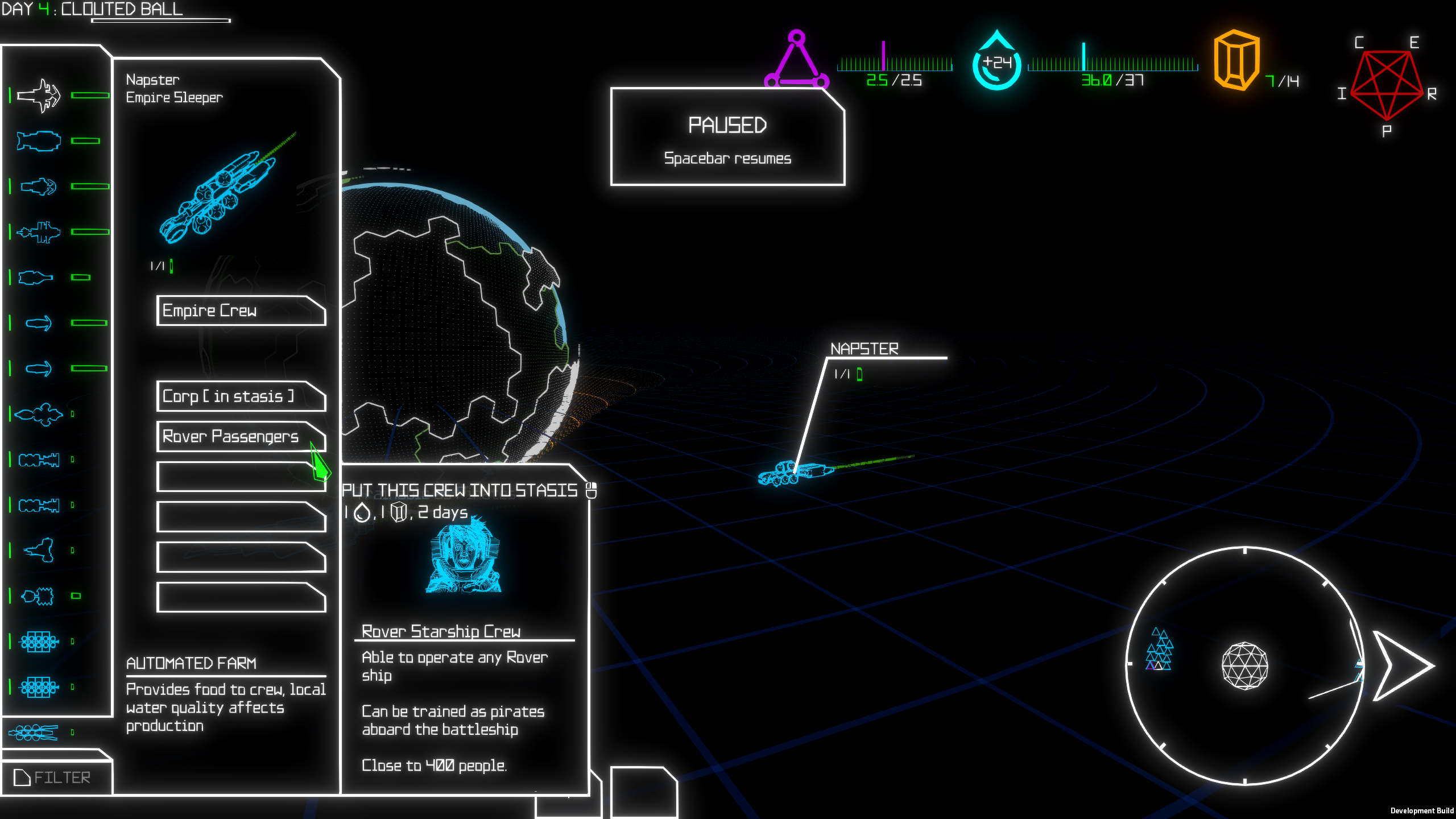 – We are working on improving how ships deal with the range of their weapons. This is an ongoing bit of work that will spill into the next version.
– Passengers aboard ships are now colored per their own faction relations with the Pact.
– Ships with a single mining laser no longer autotarget and destroy mines in range while on berzerk. Ships with multiple weapons retain this ability.
– Range rings now show when hovering (paused) a shieldship that has its shield(s) disabled by ion torpedoes.
– Every single event in the game was overhauled to reduce the number of initial messages on hail, in some cases adding questions or additional options. We removed almost all of the combat timers, allowing for longer battles to play out. And we added more variety and some more randomness to quite a few events too!
– On top of that we added a number of new events!
– Sector nodes were made much more visible.
– The starmap plotting line was finally made 3D! This fixed an issue where the dotted plotting line broke away if you rotated the starmap.
– Repair ships now show an ore-starved icon if they run out of ore while repairing.
– Repair ships also now display a progress bar when hovered. The bar fills for each point of hull / armor restored.
– Boarding parties can now be launched by the type of boarding party (e.g. Marines, Pirates, etc)
– Ships that are scouting no longer disappear from your fleet list and formation editor; instead their icon is greyed out.
– We cleaned up more of the contextual actions for transferring crew between ships. We use several words to describe the same action: crew, maroon, evacuate, rescue, crew transfer. They’re all the same action, but we use different words to help you understand things like the state of the target, and what kinds of passengers you have aboard the selected ship.
– We added some additional hover tips for things like hovering a plan when you don’t have enough ore to replicate it.
– Your fleet now stays a little closer together after jump even if you’re not using formations.
– The way we delete save files when we detect a version mismatch was improved.
– You can now attack your own shuttles, should the desire strike you.
– Scanning a mine now shows its damage and range.
– In trade, weapons of the same type now always have different values.
– Hovering non-equippable weapons no longer displays the red ‘nope’ cursor (since they can be stored in any slot), but instead adds a tooltip warning the player.
– Hovering empty slots no longer shows trade tooltips.
– Multi-selected ships now all display an animation when an action such as Abort is selected, and when ROE changes.
– Explosions are now located on the area of the ship that is damaged. This is purely visual; we do not model ship damage at that level.
– Abandoned and disabled states were added to event conditions, so, for example, fleet events no longer select disabled or abandoned ships when an active ship is needed.
Internally I continued to do work on the event creation pipeline and expanded the automated tests for events.
– The lowest resolution the game now supports is 1024×768. (Our recommended resolution is 2560×1920).

We will continue with updates relatively frequently. We are still focused on adding new ships and items, additional events and QOL improvements. We are getting closer to announcing a release date and this is your final warning that we will be raising the price of the game one more time, reflecting all the new features and months and months of work we’ve put in. So now is a good time to buy before the increase!

There is still time to get your feedback in and have an impact on our development, but that window is closing. 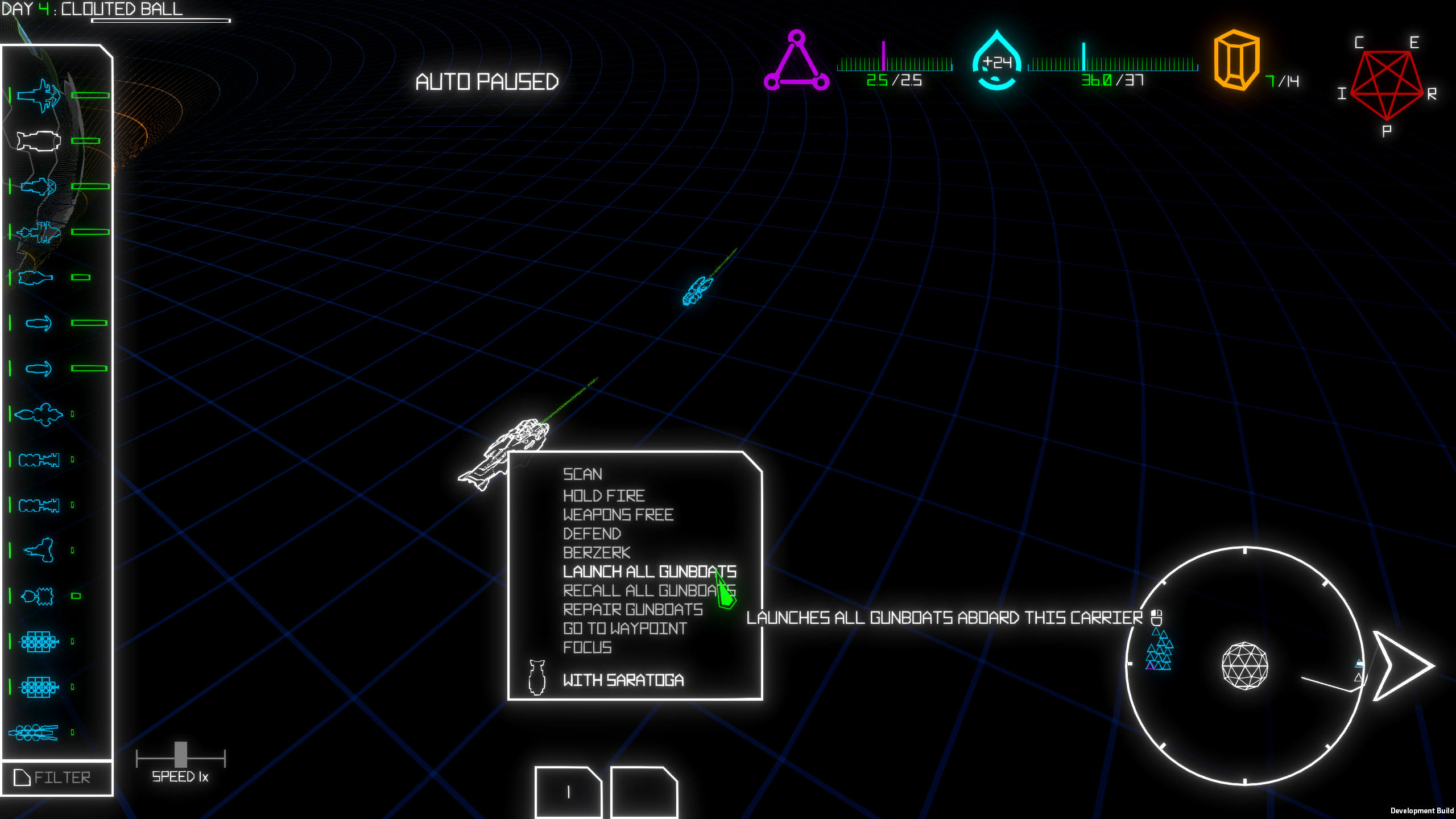 – Jumpgates now unlock when they should
– Boarding parties can no longer be launched against lifeboats
– Sector entry nodes are now properly labeled
– Ship’s cargo is now properly displayed in COYA hovers
– Diplomacy is no longer an option on disabled ships
– Boarding shuttles and lifeboats can no longer be added to formations
– Fixed an issue with incompatible weapons placed on non-warships
– Dragging all ships from a formation no longer throws an error
– Maroon action no longer appears if you don’t have passengers aboard your selected ship
– Low orbit formations no longer move veeery slowly
– Ships that shouldn’t ought to be showing on the minimap no longer are shown
– Ships that shouldn’t ought to be jumping no longer jump
– Stopped a bug related to aborting waypoints
– Boarding shuttles no longer display ROE options
– preventSectorJump is now saving properly
– An issue with conditional choices and event variables was fixed
– Solved an issue with follow spinward contextual actions
– Fixed a problem where adding a cargoship and then jumping was causing incorrect values to show
– Targeting lifeboats no longer shows Intimidate or Diplomacy actions
– Evacuate action now only shows if a station has passengers available for evacuation
– The scan animation no longer plays when you set a waypoint
– Numerous issues fixed with ship actions due to some required refactoring
– Some integers in COYAs were incorrectly displaying as floats
– Solved a strange issue in ‘the cutters’ event
– Hitting X multiple times no longer drops ghost ships
– The addEquipment action was restored to a properly working state
– Squashed two good bugs that froze the jump button
– Corrected an issue related to map rotation
– Adjusted an event so hailing harvested ships worked properly
– Fix some tags that weren’t displaying the correct text
– Saving games is again possible
– Ships no longer always try to keep their range in combat
– Fixed an issue with player contextual actions
– Corrected something with setting colors that was throwing errors
– Took a 2,200 mile road trip, woo
– Lots of minor text errors fixed