by Brian Jamison on March 8, 2021 in Uncategorized

Welcome to another massive update of XO!

Real Time Fleet Jump
You’ll notice immediately that your fleet now jumps away visibly and in real time – warships jump away last and continue defending until finally, your battleship jumps out. During the brief jump, your battleship races ahead to emerge first. You can begin taking actions, including plotting a jump, immediately after the battleship touches down. We hope you love it as much as we do, it definitely adds drama to your jump.

Top Scores
We’ve also added your Top Scores to the main menu! We hope to add more stats soon, but right now we track tidbits like your best relations, the size and makeup of your fleet, and how many jumps you survived. 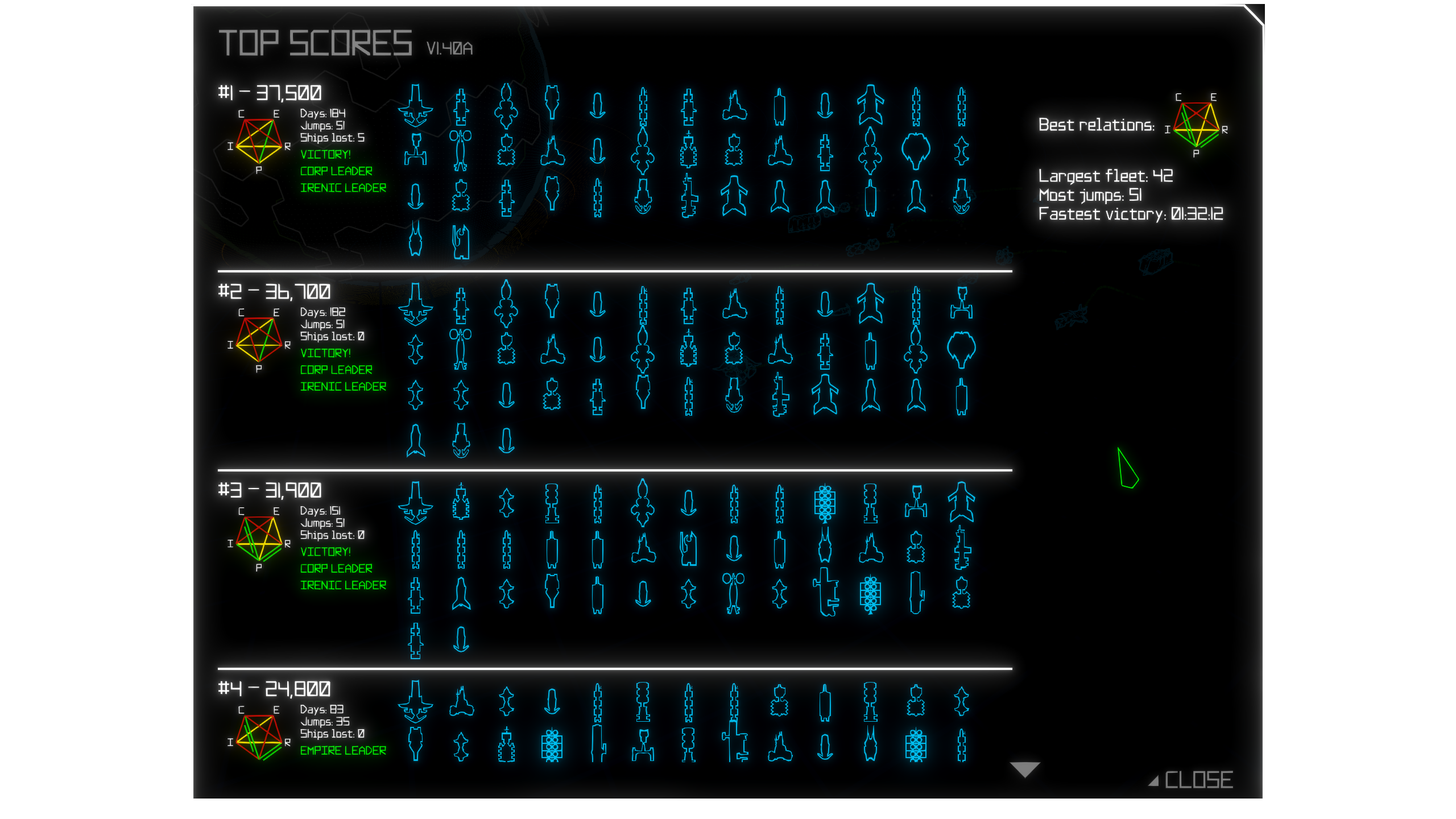 Captain’s Guide
At long last we have a Captain’s Guide! This should hopefully answer quite a few questions. The guide is a work in progress, so expect us to add, remove and tweak entries for a while. See something missing? Let us know! 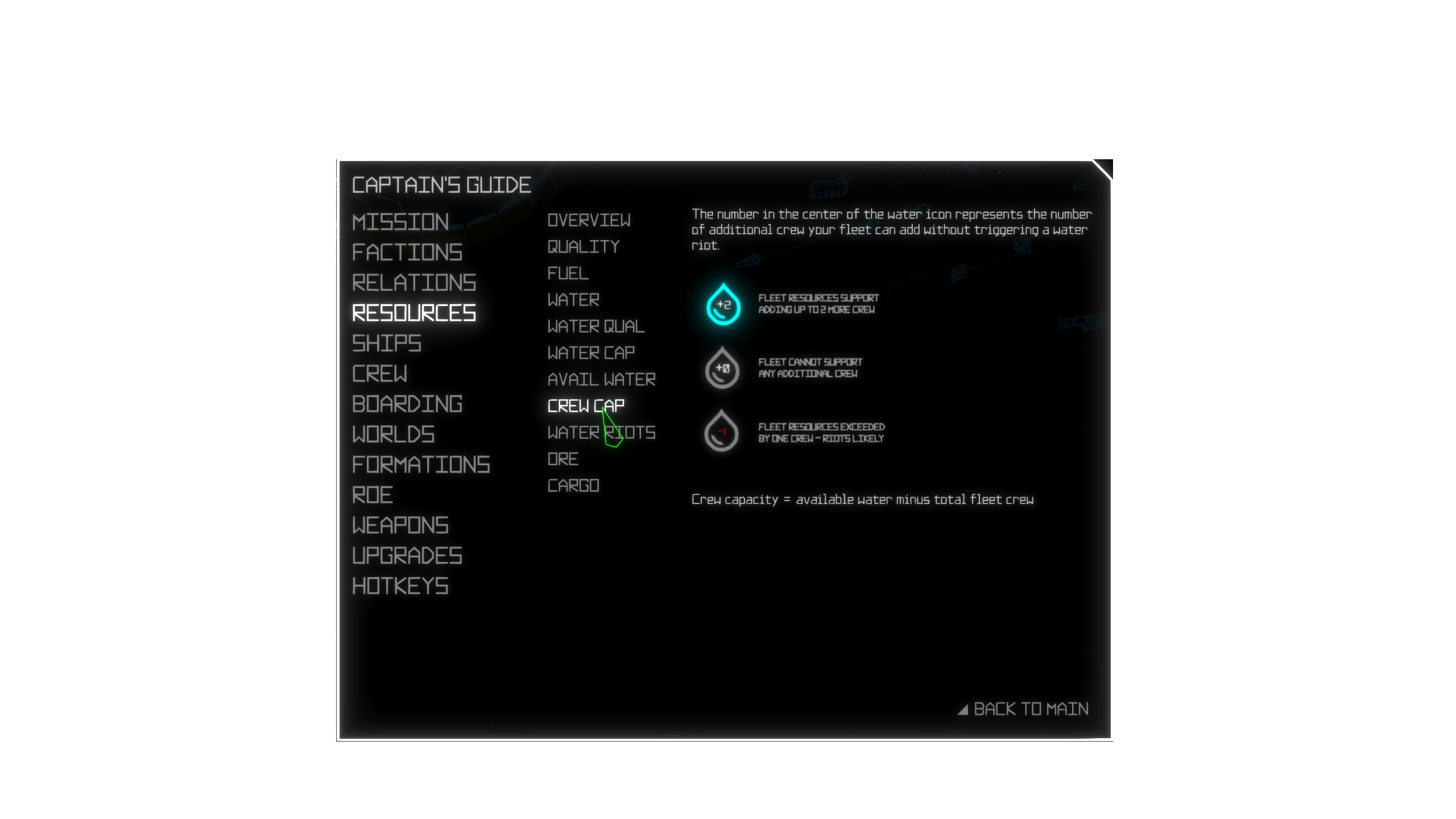 More New Features
We increased the level of ship detail in 1.40. 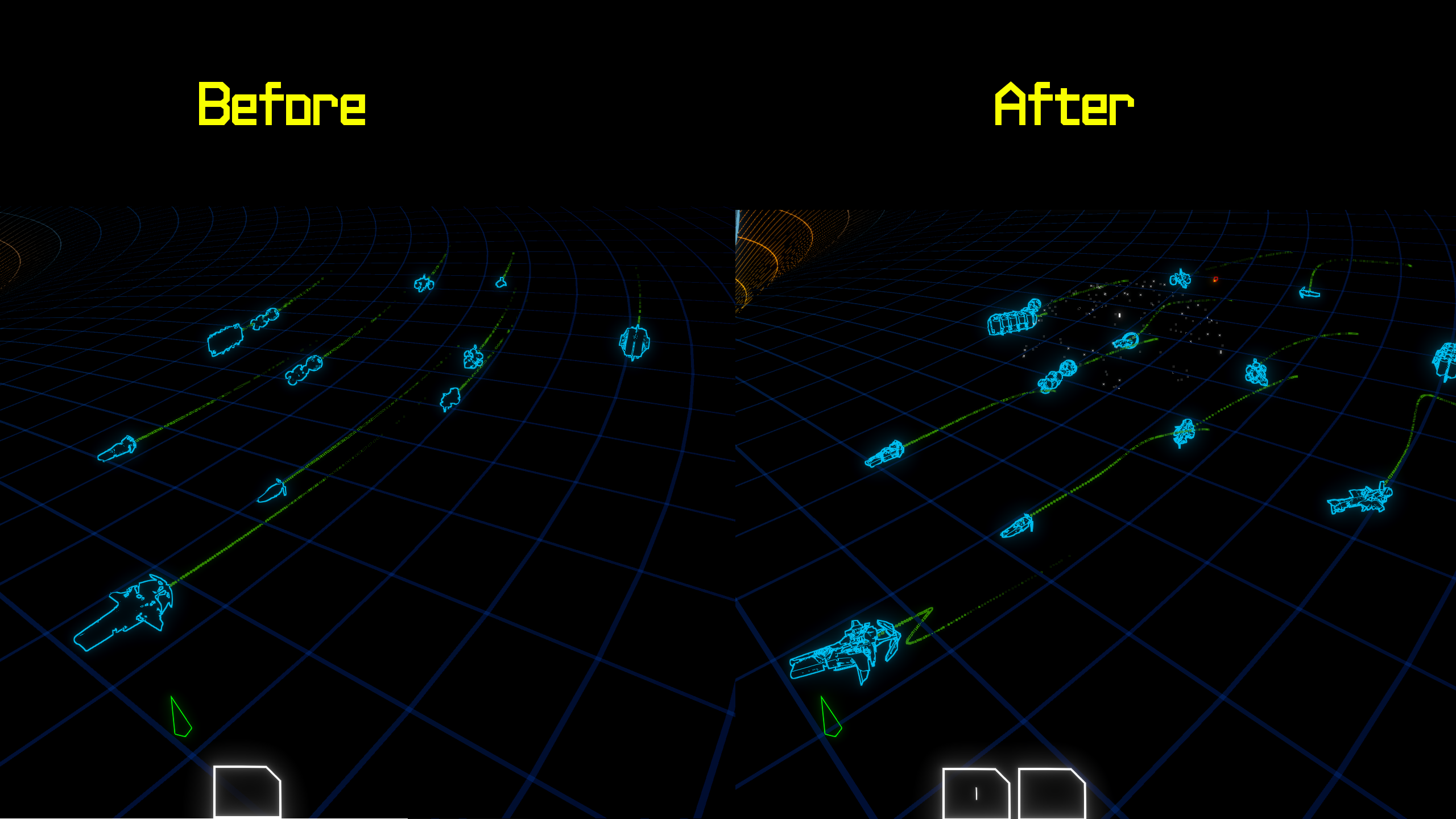 We added probably one of our biggest feature requests, scroll-wheeling the fleet list.

Formations received a total rewrite. The editor is the most obvious change, but formations in general should defend, fly and behave more like formations should. 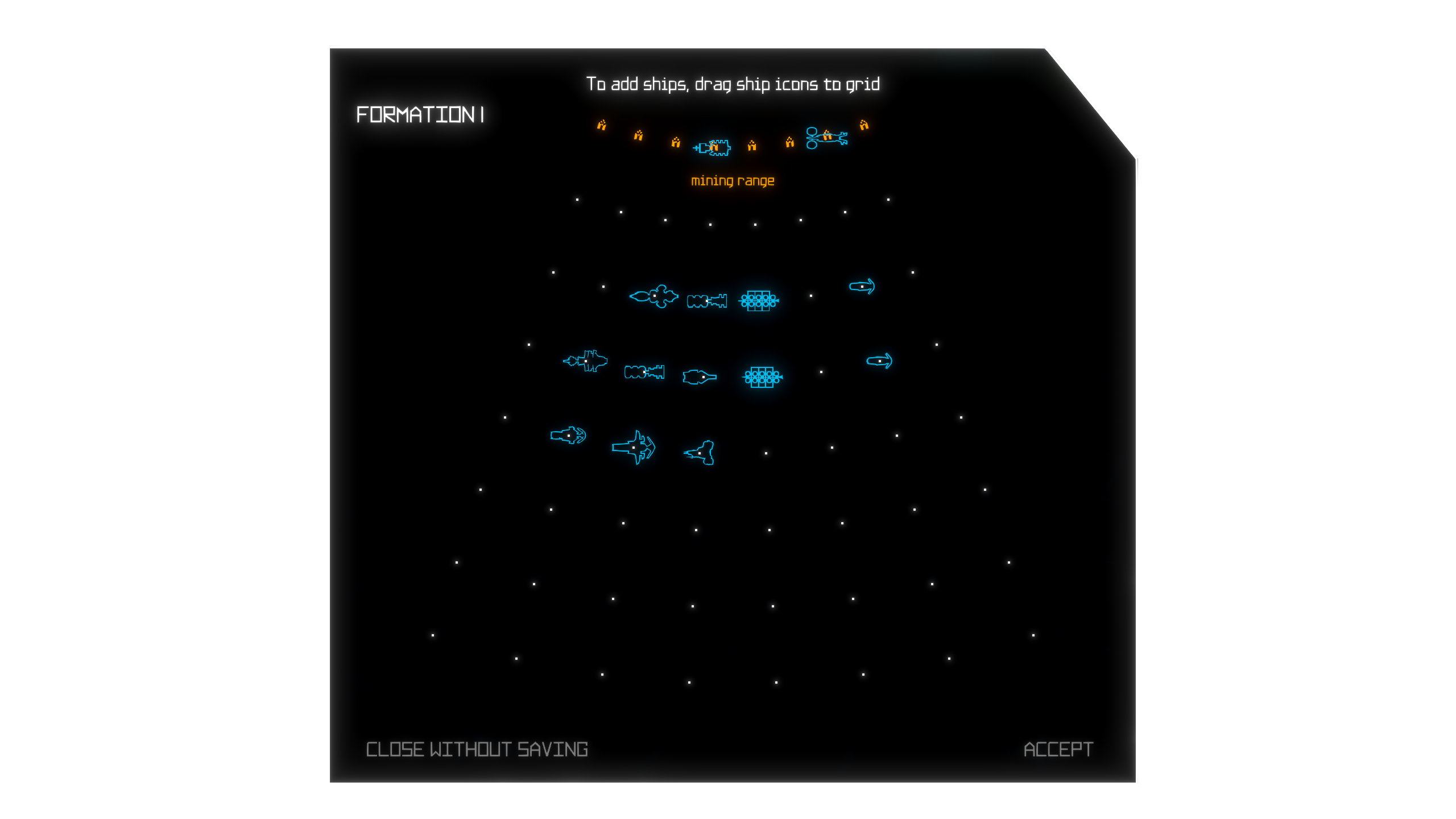 In another QOL improvement, all mining ships now temporarily hold mining operations when there is no ore available, and resume once jumped to a location with ore. The same holds true for melting ice. Mining beams now assume different colors depending on their current use.

The Irenic Plasma Shield also received an overhaul, new visual effects, and a much improved UI. There’s a lot to cover so head over to the Captain’s Guide or Changelog for all the details.

Lasers now have a groovy visual effect when hitting targets.

For new players, the tutorial was greatly expanded. Thanks to everyone who gave us suggestions for improving it.

We optimized combat effects and models to improve the framerate in large battles.

Hailing another ship now has a visible effect.

Lifeboats, shuttles and stations now have flashing beacons. This really makes it a lot easier to spot those lifeboats, and that’s a good thing, because if you leave any of those behind there’s now a good chance you’ll take a hit to relations.

The remaining boarding shuttles were modeled and added.

We added two new abilities to our extremely robust event scripting engine: a jettisonCargo action and shipSlotFree condition. With these, boarding parties now check to see if there’s room for them and take appropriate action if there is no room aboard. (Among other things, muhuahahaha)

Lifeboats no longer show up in the fleet list.

Warships and mining ships now show a large indicator above the ship when they cannot fire due to being resource starved. Weapons will continue to fire as soon as resources become available.

For about four years now I’ve wanted to re-do the ice world. It always really annoyed me that you could see through the gaps. At long last, I was able to do that. We also improved the UI for water conditions on ice worlds. 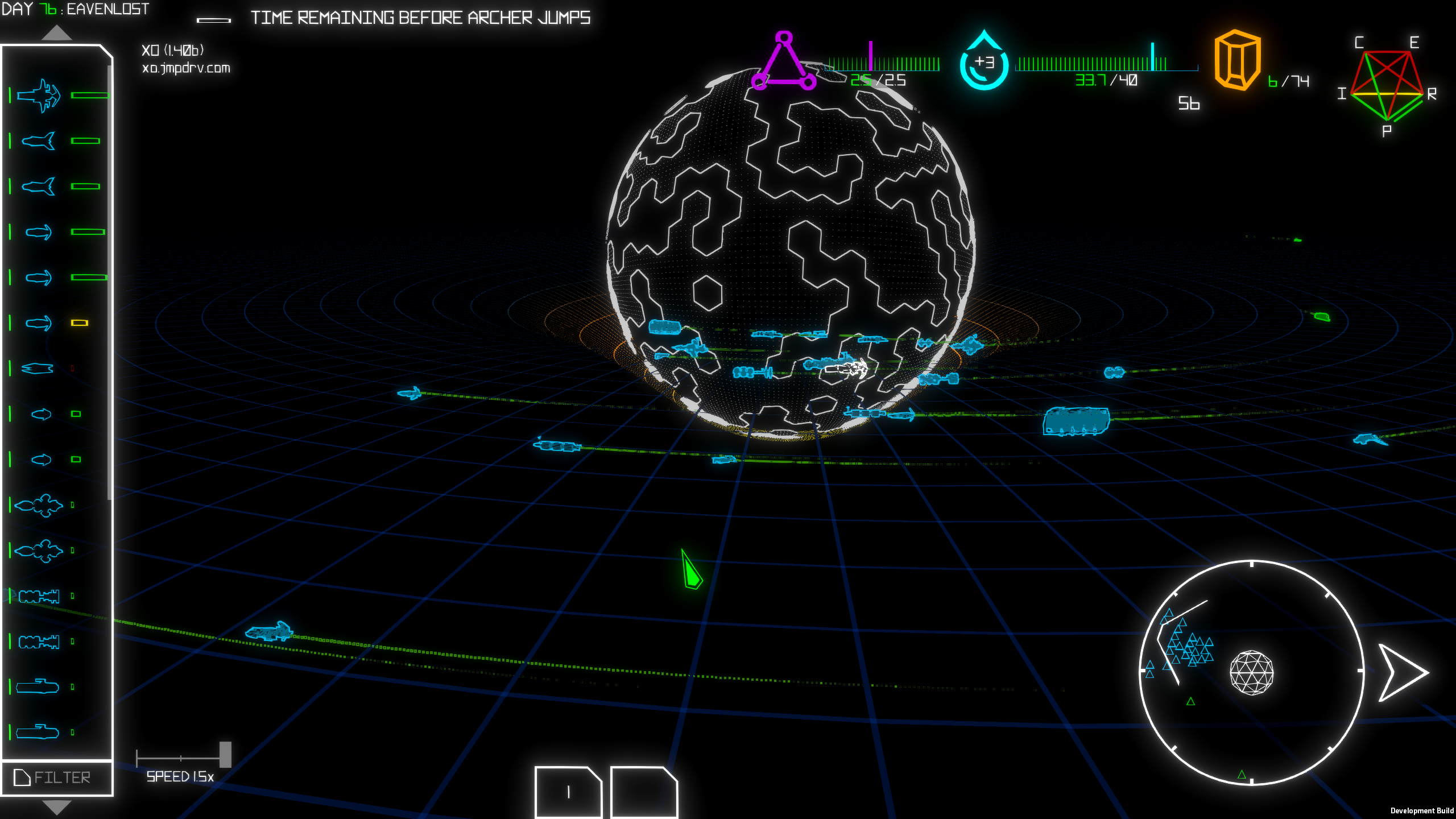 We smoothed out scrolling the galactic map.

Similar to water, when there isn’t enough fuel for jumping the fuel icon turns grey. The ore icon now also turns grey when ore drops below 1.