XO at the Science Museum

by Brian Jamison on March 27, 2015 in Uncategorized

Just a quick update on how things went at the OMSI: After Dark event…

We brought a pre-alpha test demo to the Oregon Science and Industry Museum on Wednesday for their adults only After Dark night.  There were 2,160 people who attended (according to OMSI’s event planner) which is the max capacity – so it was one-in, one-out for awhile!

This was an interesting setting for XO – it’s an RTS game after all, and I’d say most of the people who attended don’t play a lot of strategy games.  There was a wide range of features to check out, even a lock-picking class in the same room (something I really want to learn now.)  We saw quite a few people sit down and didn’t understand that they needed to use the keyboard, which is admittedly a little on us since our control scheme print-outs were hard to read in dimmed lighting.  We need to bring some book-lights for future expos.

It was cool to see some people understand the game with very little instruction, and really important to take note of where players were getting confused.  We learned a lot just from watching everyone play, and we got a chance to try out our new expo gear.  With the TVs 7 feet in the air we didn’t have to creep over everyone’s shoulders while they played, which was nice.

It wasn’t an easy decision to spring for the Displays2Go TV rack, but after last night I’m really glad we made the investment.  People were crowding around and the elevated screens made sure everyone got to see what was happening.  We’re hoping to make it out to as many indie game events as we can this year, and we’ll be bringing this thing with us every time.  We also had a short gameplay trailer looping on the right side – something I just threw together in iMovie this week, but it still worked out great! 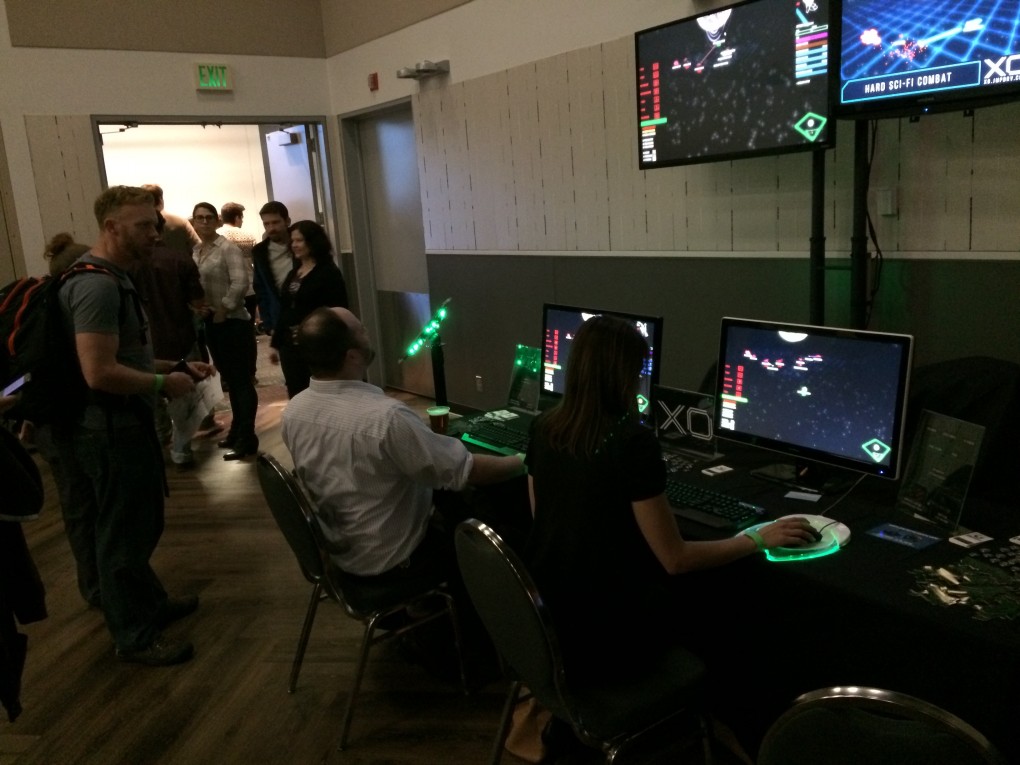 We’re fixing a few bugs and adding a few features for the Game Developer’s Collective 1st Annual Indie Night this Saturday, so if you’re around Seattle for Emerald City Comic Con, drop in and say hi – it’s free!

P.S. – check out a little write up about us in this week’s Portland Mercury!